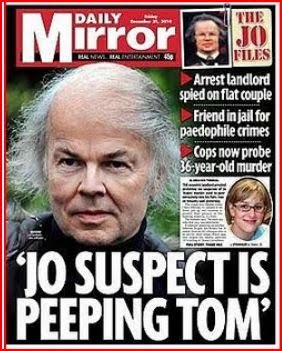 Remember Chris Jefferies? If you don't, the front pages from last Christmas time will no doubt ring a bell.

He's the retired schoolteacher from Bristol who was wrongly suspected of Joanna Yeates' murder - and was thoroughly monstered by most of Fleet Street in the process.

Brian Cathcart, professor of journalism at Kingston University, interviewed him for the Financial Time's Saturday magazine, and while much of what he says is unsurprising, it's worth reading in full. (Like most of the FT's content it's behind a pay wall, but you can access it immediately by clicking through from Google).

Jefferies talks about the three days of offending media coverage, most of which he missed, because he was being questioned by police:

“I remained oblivious of the extraordinary media interest even the day after I was released,” Jefferies recalls. He could not return to his flat so he stayed with friends who also hesitated to discuss the press coverage. It was only when he “blithely proposed”, as he puts it, to head off into Bristol to buy some clothes and washing things that matters came to a head. This prospect “so alarmed the solicitor that he rang to say that if my friends couldn’t persuade me not to do that, he would himself come down from London in order to persuade me that this was a very bad idea”.

Nonetheless, friends and family who were aware of the blanket coverage were shocked and appalled.

He had spent Christmas with relatives in Derbyshire and had planned to visit an aunt in Cheshire for New Year. Jeffries said: "She was obviously one of the first people that I telephoned after I was released and she was… extremely relieved to hear me." She said 'she felt as if the experience of those three days had aged her a hundred years'. Those were the words that she used."

There's also plenty of examples throughout the piece of just how skewed the coverage of his arrest was - including this gem.

The Mirror blew up one picture to show that Jefferies had an A-Z of Bristol in his car, adding the caption: “Evidence…maps were on the back seat”.

It's worth noting though, that as much as he's angry at the media, Jefferies is, if anything, much angrier at the police. He compares the entire experience to "a kind of rape", and is currently suing Avon and Somerset police for false imprisonment, breach of his human rights and trespass. While the case against the media is settled, thanks to a full apology and £500,000 payout last July, his complaint against the police is still very much ongoing.

One final point is worth noting. In April, after Jefferies announced his decision to sue six newspapers for libel and invasion of privacy, we wrote a piece about the lingering online legacy faced by the wrongly-accused, pointing out that while he had been fully cleared of any suspicion of wrong-doing, a quick Google of "Chris Jefferies" painted a very different picture, bringing up not just the most egregiously libellous articles but a host of straighter pieces that also pointed the finger of suspicion.

Well, we've just repeated that Googling - and thanks in part to what looks like some pretty determined SEO work by the likes of MailOnline, the top pages of results now largely reflect the mistake that was made. Jefferies' rehabilitation is complete.

* This article originally appeared on the Fleet Street Blues website.