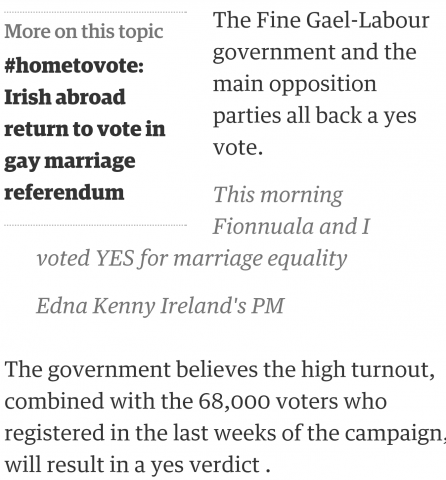 Great news that the once illiberal Catholic country of Ireland has become a trailblazer for the rest of the world by voting to legalise gay marriage. It's the first time same sex matrimony has been voted on in a national referendum.

Polls show that young people - who have been at the hearet of the Yes campaign - enrolled to vote in their tens of thousands and turned out in huge numbers to support gay marriage.

Irish prime minister Enda Kenny, leader of the Fine Gael party, told the nation in a live broadcast: "I say to all same-sex couples in our country: this is about you, it’s about your right to say two small words, made up of three simple letters – I do.

He added: “For you, in your lives together, may they become your letters of freedom.”

In its euphoria, Britain's liberal Guardian newspaper printed an hilarious howler by captioning taoisearch Kenny "Edna". What a faux pas.

Australian's Dame Edna Everidge could be forgiven a wry smile.