Jail or empowerment for Black youth? 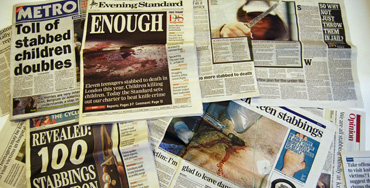 Black youth-savers have fired the first broadside in their fightback against crime and the rising head count of youth in prison and gangs, according to participants in the State of Black Britain conference held recently in London.

After decades of drift, they are targeting under-performing teenagers, street hustlers and the toughest hooligans with a new message:  “Salvation is nigh. Aspire and you’ll get through the agony, somehow”.

But who are the Black youth-savers and have they found the right initiatives for a fateful choice: Inclusion or Incarceration of Black youth?

Crime-busters
Sympathetic police officers and prominent achievers are another youth-saving force. “Tough on crime, tough on the causes of crime” is a repeated slogan. They “aim to halt rising Black on Black crime, drugs, gang wars and anti-social behaviour”.

Raising aspirations is on the top of Officer Leroy Logan’s action agenda at REALLITY (Raising Everyone’s Awareness of Lives Lost in the Youth). The Metropolitan Police superintendent and founding member of the Black Police Association wants to “see lives restored and regenerated not alienated and or destroyed”.  He offers an antidote to youth crime that leads to streets of peace and safety.

Black professionals encourage confidence and self-worth
Successful professionals say increased education and training are crucial indicators of change in the state of Black British youth. “There is no better rung on the ladder of advancement than schooling from the primary to the higher degrees level”, said Allan Nigel Smith, Head of Global Risk Strategy, HSBC Bank.

Professional youth workers are expanding ways for ex-offenders to serve their communities. Jeremy Whittle of Resettlement UK is determined to steer Black youth away from crime, out of jail and back into productive life. Jeremy Crook’s Black Training and Enterprise Group (BTEG) focuses on jobs, business, and training.

Lawmakers and role models
Youth-savers in government and the arts are making themselves heard. Attorney General Baroness Patricia Scotland and writer-actor Kwame Kwei-Armah introduced “National Role Models -- to “Be an inspiration and Make a difference” --   to an audience of 300 in London in December.

Innovators in business are also choosing to make a difference. They argue that self-employment and ownership is the way out of poverty and insecurity. “Using their own ideas, youth could start a future in business,” is the mantra of Levi Roots. The dreadlocked musician’s Reggae Reggae sauce “put music on the food shelves” of British supermarkets.

The supremely confident, Rev David Shosanya, concludes, “In the midst of political and economic turmoil, youth must become political literates and learn the rhetoric of the media and public square, and study every issue and use their vote wisely”.

Take a PowerStepUp
But Black youth-savers may have underestimated the challenges they face. Looking at the larger picture suggests they have more to do to secure inclusion over incarceration of Black youth.

They must tap young people’s creative and income-producing abilities. This will add cultural, political and economic capital to distressed Black communities.

They must establish sustainable institutions and life-affirming moral practices. This will strengthen the common fund of resiliency, optimism and spirituality of African British youth and communities.

The national implications are clear. In the words of Lord Victor Olufemi Adebowale, Britain’s first “People’s peer” and social care charity leader, Black youth “are a potent symbol of a stronger civil society”.

*This is the fourth instalment in the Black History Month 2009 series on Unshackling the Afro-British Mind by the author. It is hailed as essential reading for anyone who wants to chart the present failures and future prospects in the State of Black Britain. Thomas L Blair is a well-known academic and independent political commentator on Black urban affairs at http://Chronicleworld.org. Details of his book THE AUDACITY OF CYBERSPACE -The struggle for Internet power can be viewed at http://bit.ly/m-ybooksblair  and is highly recommended by The-Latest.com.

Child protection sacrificed in the name of 'art'