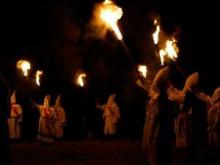 Sunday afternoon after church, youth pastor Demond Dawson was rounding up a van load of kids dressed in their Sunday best. The group had stopped at the Dollar General in Abbeville for snacks and cold drinks.

As the kids teased each other on the sidewalk outside the store, a weekend rally of the Ku Klux Klan taking place at the very same time in this county was weighing heavily on Dawson’s mind. A recently formed branch of the KKK - the New Empire Knights - held a three-day “KKK Jam” rally over the weekend in an undisclosed location in Abbeville, which it calls its national headquarters.

Klan organisations have made numerous public overtures in South Carolina in recent weeks, including a recruitment campaign of bags of candy tossed into yards with leaflets reading, “Save Our Land, Join the Klan.” According to hate group watchdogs, however, the Klan has dwindling membership and is in a “last gasp” to retain relevancy.

Word of the Klan rally in Abbeville has prompted a lot of questions from the children of the predominantly African-American Mount Pleasant Baptist Church, Dawson said. What they want to know most, he said, is why Klan members wear masks. “That scares them.”

“It’s just more trouble on me, raisin’ them up to do the right thing when they can see people with masks on, then I’ve got to explain to them, ‘why do you have a mask on?’” Dawson said. There’s a rumour circulating through the black community that the Klan will soon march through town, right through the town’s square. “[The kids] haven’t seen them yet, but I don’t want them to see them,” he said.

Abbeville’s New Empire Knights claim to shroud their activities in secret, yet publicly posted details of the rally’s agenda amid sharp taunts about the group’s reach. Abbeville County resident Charles Murray, the self-proclaimed Imperial Wizard of the New Empire Knights, refuses to speak by phone and corresponds only by email. While Murray did not return emails seeking comment, he has posted recent email exchanges online with local reporters. The New Empire Knights have been headquartered in Abbeville since March 2013, when he says the organisation was formed and he was elected leader.

When asked in one of these exchanges about membership numbers, Murray is pointedly coy: “I have fewer members than I want and more than you probably think,” he said. Teachers, doctors and law enforcement officials are among members, he wrote. The goal, he said, is “to build a legit pro-white organisation and become the voice of White America.”

The organisation’s website - a blog of running commentary - claims the group had 116 members from 15 states in attendance at the weekend rally. Activities included speeches, a cross burning and a vote deciding not to hold public rallies.

They also decided, he said, to keep the KKK Jam in Abbeville.

Despite the recruitment campaigns and the weekend rally, the Ku Klux Klan is having its “last gasp,” according to Lecia Brooks, outreach director for the Southern Poverty Law Centre (SPLC), which tracks hate groups and extremists in the US.

The Klan has been steadily shrinking in recent decades, according to the SPLC, which keeps count of the chapters or “klaverns.” In 2010, there were 221 klaverns in the U.S. That number today, however, has receded to 150 klaverns with an estimated 4,000 to 6,000 Klan members nationally. By comparison, membership during the 1960s civil rights era was about 40,000 in the US, and 4 million during the Klan’s peak in the mid-1920s.

“The Klan group in Abbeville is tiny and the Klan in general is not the threat we think they are,” Brooks said while waiting to speak before a peace rally in Greenville, S.C. The event was in direct response to the Klan’s rally in Abbeville one hour away, and drew a crowd of more than 300. “For a group like this to come together to stand against them minimises them and diminishes their power even more,” she said.

Klan recruitment is happening all over the country and not just in South Carolina, she said.

“The Klan and hate groups in general continue to be more attractive to people who are less educated, people who are poor, the sort of white people who are feeling particularly marginalised and who are feeling the realities of the shifting demographics,” Brooks said. “They’re constantly recruiting because their membership rolls are dwindling. They are becoming more and more irrelevant every day.”

“The Klan, those flyers, the notion that the Klan still exists is enough to spark fear in people and that’s a very real emotion,” she said. “It wasn’t that long ago that they were wreaking terror.”

Many black residents of Abbeville were reluctant to speak about the Klan meeting in the area. Charlene Crawford, however, said she fears the weekend’s meeting in Abbeville will “get something started.”

“[Remember] when they drug that man all the way through Abbeville?” Almost a century later, the 1916 lynching of a wealthy black landowner who was stabbed, dragged through town, hung from a tree and used for target practice - all in a dispute over cottonseed pricing - still lingers. “That stuff happened back yonder. It’s time for people to change. It’s time for us to love one another and stop hating one another. All of us bleed the same blood,” Crawford said.

“Something is gonna break out,” Crawford said, adding that she fears it will end up with someone being killed over race. She, like Dawson, has heard rumours of a Klan march through town. The city government hasn’t spoken out against the group, she said. “You think the city’s men are going to come over there for us? No they will not,” Crawford said.

According to Shawn Bell, assistant to the city manager of Abbeville, the city has not received a permit application for a parade or march from the New Empire Knights. When asked how the city has responded to the Klan organisation identifying Abbeville as its national headquarters, Bell dismissed the issue by saying since the rally was held outside the city limits the matter was outside of city jurisdiction. Abbeville Mayor Sarah Sherwood did not respond to calls or emails requesting comment.

The rally, while part of a trend of bluster from the hate group, is troubling, said the head of the state’s National Association for the Advancement of Coloured People (NAACP). “It’s a lot of show but no substance,” Dr Lonnie Randolph, Jr., president of the South Carolina NAACP, said of Klan activity in the state. “I’m always concerned because a spark can cause a fire.” There’s been a dramatic increase in “Klan-like” venomous language and rhetoric since 2008, he added. “Racism is very common and prevalent. We don’t talk about it but that doesn’t mean it has gone away,” he said.

The surge in local press coverage of Klan recruitment, however, could potentially help the Klan see a financial bounce from bringing in a handful of new members. “They are interested in recruiting members because new members mean new dues,” said Mark Potok, an extremism expert at the SPLC. “Many leaders of Klan groups live off the dues of their members.”

“They are very much impotent, and that’s not true about other parts of the radical right,” which is very large and vigorous, Potok said. “Within that, the Klan is the weakest sector. The truth is,” he said, “they don’t really do much.”