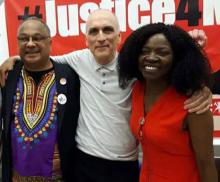 More than 30 Labour organisations around Britain have demanded party bosses reinstate a campaigner who was expelled following a clash with an anti-Jeremy Corbyn MP at the launch of a report into anti-semitism and other forms of racism. And on Wednesday the rail union RMT, which helped found the Labour Party, passed a motion in support.

Marc Wadsworth was initially suspended from the party in June 2016 after accusing Labour MP Ruth Smeeth, who is Jewish, of working "hand in hand" with a right-wing journalist Kate McCann, of the Daily Telegraph, to undermine Corbyn

But most of what Wadsworth said at the launch of the Chakrabarti report was about the need for greater Black representation in the Labour, a point Corbyn said he agreed with but the media ignored.

Wadsworth, a veteran anti-racist campaigner who helped the parents of murdered Black teenager Stephen Lawrence set up their campaign for justice, was ousted from the party in April after a disciplinary hearing found he had breached a rule, which says members must not act in a way that brings the party into disrepute. He was not found guilty of anti-semitism. 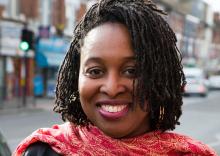 Now Constituency Labour Parties (CLPs) throughout the country have backed motions calling on party bosses to reinstate Wadsworth, with the campaigner’s Croydon North branch, in south London, among those joining the calls for an overhaul of Labour’s much-criticised disciplinary rules under which he was punished.

Grassroots Black Left motions in support of the ex-member have also been passed at CLPs with Black MPs including Brent Central (Dawn Butler), and Wolverhampton South West (Eleanor Smith), as well as Bath, Hastings and Rye, Hackney South and Shoreditch, Hove, Croydon Central, all three in Ealing, Newark, two in Norfolk and Sheffield in recent weeks.

Soon reinstatement motions will be up for debate in Corbyn’s Islington North, Hackney North and Stoke Newington, where Diane Abbott is MP, Edmonton (Kate Osamor), Streatham (Chuka Umunna) and Tottenham (David Lammy) among others.

A change.org petition supporting him has gained more than 2,600 signatures, including those of stars like Soweto Kinch, who said: "“The expulsion of Marc  Wadsworth is disgraceful, and served only to discourage Labour membership from anti racist organising, and speaking truth to power. We must reinstate him, to preserve the integrity of the Labour project, to kick back at weaponised antisemitism and transform Britain for the Many and not the Few!”

Wadsworth - who did not know Ms Smeeth is Jewish when he made the remarks that led to his expulsion - said the support had been "overwhelming" and predicted that more parties would join calls for a rethink.

He said: "I’ve been told of motions in the pipeline in Manchester, Liverpool, Nottingham, Chester, Enfield Southgate, Brentford and Isleworth, Wales and Scotland."

"There’s a tsunami of outrage coming from the party grassroots over the miscarriage of justice. Members feel it glaringly exposes the fact the current discredited party disciplinary process is unfit for purpose, as Shami Chakrabarti said in her report, and needs to be rapidly overhauled."

Wadsworth added that supporters from "across the Labour political spectrum" had backed his reinstatement in Croydon - and he urged MPs to take note of the motions.

"Of course, elected representatives, including MPs, must take heed of the opinions of the party members who selected them, especially when those views are clearly overwhelming,” he said.

Wadsworth stated he would continue to press for a "negotiated settlement with Labour that avoids a damaging High Court hearing", and will look to drum up further support among CLPs and trade unions with a summer #Justice4Marc speaking tour of local parties, for which he has launched a crowd funding appeal to pay for it. He has already visited eight cities and will go to more, including Cambridge, Luton, Nottingham and Leicester, next month. 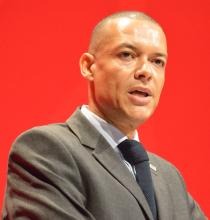 Labour currently has no process by which ex-members can directly appeal a decision handed down by Labour's National Constitutional Committee (NCC) disciplinary body.

Wadsworth's case prompted deep splits in the Parliamentary Labour Party when it was heard in April, with around a dozen MPs led by Wes Streeting, including Jess Phillips, Louise Ellman, Luciana Berger, Rachel Reeves and Margaret Hodge marched with Smeeth as she arrived to give evidence at the activist's disciplinary hearing. No Black MP joined them. 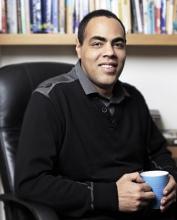 Trade union activist Glen Hart, a Wadsworth supporter, said: “The sight of a gang of white MPs marching against one Black activist was sickening. Why weren’t they protesting to support the Windrush generation or Grenfell victims?”

Williamson, a close Corbyn ally, said of the decision to expel Wadsworth: "It flies in the face of the evidence that was presented and offends against the principles of natural justice.”

"The NCC's decision has all the hallmarks of predetermination and tramples on the Labour Party's record of standing up for fairness.”