Landlords return to 'No Blacks, no dogs, no Irish' 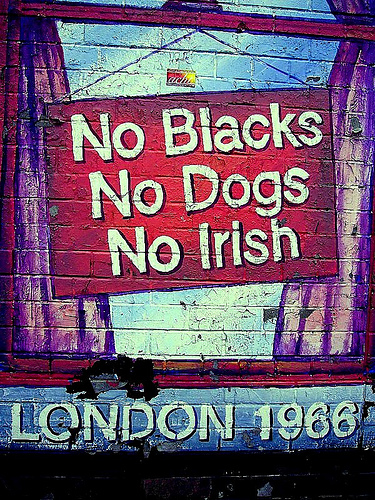 Human rights campaigners say some British landlords have returned to the “bad old days of no Blacks, no dogs, no Irish”. This harsh observation follows the uncovering of illegal practices aimed at stopping foreign nationals from renting properties.

Estate agents in Boston, Lincolnshire, have been caught discriminating on behalf of landlords to prevent minorities renting their homes. Human rights lawyer Louise Christian said: “It feels like we may as well, in some cases, be going back to the days of ‘no Blacks, no dogs, no Irish’, because that’s what is being perpetuated at the moment by some of the agents and the landlords.”

BBC reporters posing as possible tenants approached a number of letting agents. All were successful in being able to view properties. However a Polish man sent by the BBC was stopped from viewing the same homes. Estate agents were found to be complying with requests by landlords not to let homes to foreign workers.

Greg Pacha, who is Polish, said: “Sometimes they tell you behind the office, ‘Oh you are not English, then?’ What does that mean, oh? Does that mean I can’t get the place? I could tell you 100 different stories but just change the name of the agent.”

Such actions are not only clearly against race relations laws but are also contrary to the National association of Estate Agents own rules.

Undercover reporters discovered that more than half of the 20 estate agents they investigated were prepared to bar potential tenants because of their nationality, as requested by landlords. One agent, who was secretly recorded, said: “you can’t tell by looking at them; particularly the Eastern Europeans, but you can tell as soon as they speak.”

He added: “We say to the migrants – well, which ones do you want to look at? Then we ring them back and say ‘Sorry, that one has gone’.”

Another agent explained: “I think of a reason – ‘The landlord thinks you don’t earn enough money.’ I can’t put on the paper – ‘No Polish, Portugese, Latvians or Lithuanians.’”

Arpita Dutt, a anti-discrimnation lawyer, said: “What they (the agents) should be saying is, ‘I can’t do this. I can’t act on these instructions.

She insisted that the agents should stand their ground and not help landlords to break the law.

Producers of top musical sued for 'ripping off' writer

1 Response to "Landlords return to 'No Blacks, no dogs, no Irish'"

<P>This just goes to confirm what most folks from ethnic minorities say about this country: that rascism is embedded deep&nbsp;into the institution and that its part of the structure. Its amazing the way they will joke and act as if your best best of friends but when it comes to getting that lucrative job or promotion they favour their own&nbsp;kind. We&nbsp;still have a long way to go where every man will be judged by the content of their character.&nbsp;</P>