Lazy Brits are losing the fight against obesity 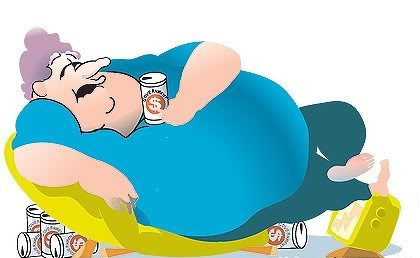 Eating too much, doing too little. This is the big problem that results in the ridiculously high number of obese people in the UK.

The British population needs to start realising that obesity is just as bad as climate change and that it is obliged to do something useful about it. This is not an issue the government should be wasting time on. It is up to individuals to take action and acknowledge that they are not only harming themselves but the nation as a whole.

The direct cost as a result of treating obese and overweight individuals is draining the National Health Service (NHS) by as much as £4.2 billion and it is predicted that this will double by 2050 if attitudes don’t change.

As if that wasn’t enough, the increased obesity rates have caused a significant rise in type 2 diabetes and the NHS pays £600m a year for diabetes’ drugs alone.

Not only are people’s lack of determination and will to lose weight, draining money out of the country, but the rising number of fat people is also contributing to global warming. Yes, that’s right. We really don’t need more reasons for our environment to deteriorate.

Scientists have already proved that food production is a key source of CO2 gas emissions. This means that the more people eat the greater the food production, causing more CO2 emissions. Besides, large people probably drive more than they walk or cycle, which also damages the environment.

The government has not been successful in ameliorating the problem. In January last year, it launched a healthy living campaign “Healthy Weight, Healthy Lives,” in which it invested £372 million. Did the campaign make progress? Not really. Authorities have also paid overweight people to lose weight and keep it off. There was even the first “National Obesity Week” four months ago. Aren’t people “aware” and encouraged enough? It’s time to take real action.

There are also plans to shrink crisp packets, pork pies and sausage rolls. Doctors are so desperate that they are suggesting taxing chocolate and sugary soft drinks.

Moreover, the authorities appeared to be thinking about money alone when they allowed the main food sponsors of the 2012 Olympics to be McDonalds, Cadburys and Coca Cola.

The media can also be blamed as the public are bombarded with junk food advertisements.  Not to mention the country’s excessive alcohol consumption. Some say the problem of obesity can be traced back to the 70s where food turned cheap and fast. Then to the technological revolution, which brought television, transport developments and caused more sedentary life styles.

British culture doesn’t exactly have a good reputation for healthy eating. Today, a lot of people don’t even see being overweight as a problem.

Obesity can be attributed to environmental and social factors such as changes in work patterns, motorised transport, food production and food-selling or alcohol. However, at the heart of the problem is an imbalance between energy intake and energy expenditure, which basically means nutrition and physical exercise. For that, parents and educators must be held responsible.

It is crucial to start teaching individuals how to lead a healthy lifestyle and educate them on the importance of good nutrition and exercise habits at the start of their lives. Numerous studies show that fat children are far more predisposed to grow up into fat adults- together with the large number of health problems that being overweight brings.

Teaching children what they should eat, and what they should not, and stressing the importance of good food choices, is fundamental. Kids should be aware of how many calories food products contain, what portion sizes are appropriate and the nutrients they need to intake. Additionally, the importance of exercise in their daily lives should be taught from an early age.

Physical exercise classes (PE), which require intense movement, should be offered more than once a week in schools. Also, if all children were taught cooking, they could see for themselves the amount of “stuff” that goes into certain foods they eat, for example the amount of sugar and butter required to make a cake. Canteens should completely eliminate unhealthy options and listen to experts like popular UK chef Jamie Oliver.

Exercising and eating correctly while young, means people are inclined to stay that way and won’t grow up into fat adults.  It is vital to start early and emphasise the seriousness and magnitude of eating healthily.

Yes, some people are more predisposed to gain weight because of medical problems like thyroid malfunctions. But these are different cases, and the combination of a treatment (such as for hypothyroidism) good eating and being active can be effective in addressing the concern. For the most part however, obese people can lose weight by eating less and moving more.

It’s time for Britain to overcome its battle with obesity once and for all.

Why Robert Mugabe is unmoved by attacks from the West