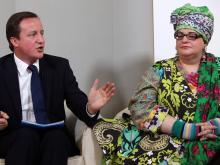 Four years ago, before the sensational closure this summer of the UK’s most celebrated charity, amid allegation of financial mismanagement and sex abuse, Marc Wadsworth ran a blogging course there. Here is his insider’s report.

Kids Company’s charismatic and pushy chief executive Camilla Batmanghelidjh was the toast of a host of celebrity backers including Prime Minister David Cameron, who counted her among his advisors.

She latched onto a gold mine with her novel charity for young ex-offenders, the disadvantaged and hard-nut but vulnerable children from tough estates in Peckham and Brixton, south London, that fitted Cameron’s now discredited “Big Society” vision – a shrunken state outsourcing social services.

Neatly turbaned and brightly-dressed Batmanghelidjh, who was born in Iran, won accolades for the work of the organisation she set up as a Camberwell, south London, drop-in centre with her own money in 1996. It grew phenomenally after that. Like with most organisations, the biggest cost was the wage bill.

Kids Company’s aims were to “restore trust and provide an environment in which ‘hard to reach’ youngsters could begin the healing process”, using a support system that included psychotherapy, counselling, education, arts, sports and a hot meal at lunchtime.

Such were the glittering array of A-listers stepping forward to lend their name to such a heart-warmingly worthy cause that a snapshot of one of its girl clients with Prince William and Harry at her side in Botswana was just one of many I saw on a wall of photographs in the canteen.

Most of the clients were African Caribbean, hence the name of its Urban Academy at Southwark, south London. “Urban” is a code for Black inner city culture, including music, dreamed up by white liberals, like the people who ran the place, because they prefer it to the “b” word.

Kids Company was a classic example of the “Guinness effect” where white people were on top and Black people at the bottom.

One yuppie woman tutor, with a posh accent, boasted to other staff huddled around her in the canteen about her bijous pied-à-terre in Amsterdam, a far cry from the miserable homes of her clients.

This may explain why Britain’s white, male, middle-class power elite, including key journalists, clamoured so enthusiastically to make Kids Company top of the pops in the highly competitive charity world.

The sheer amount of public money that it received from successive governments, Labour and Conservative – about £46m according to a National Audit Office investigation – was practically unheard of among most of the country's more than 160,000 charities.

Yet, at Batmanghelidjh’s showpiece Urban Academy, staff and clients called the place “Kids Chaos”. This was picked up on by MPs who grilled Batamanghelidjh and BBC executive Alan Yentob, the charity's chair, this week.

Despite the millions of pounds received by the charity, there was no control over the attendance of clients – they either didn’t attend or dropped in when they felt like it.

Computers had broken down, the tutor in the film department had to use her own camera, furniture was in disrepair and “key workers” and clients verbally abused each other.

Once such worker stormed into a class I was teaching and openly argued with his client, paying no regard to the other students or me.  I had to ask him to leave.

When I complained to a manager I was told: “We have problems with key workers sometimes.” I witnessed one of them calling a client: “Stupid.” Though he said it was meant as a joke, because the comment was made in full earshot of clients and staff, it was demeaning not funny.

Drug taking and violence was not tolerated. Burly Black bouncer-like security guards roamed the building and big signs around the place warned that the alarm system was linked to the police station.

Though once, during my short time at Kids Company in the summer of 2011, I did see a “yardie” Jamaican smoking a cannabis “spliff” on the pavement outside the Urban Academy.

“Chief”, a Nigerian who was the longest serving staff member, said the most disruptive elements were either dead, as a result youth on youth crime that made the neighbourhood from which the clients came the most notorious in Britain, or in prison.

The Urban Academy reception area could be unwelcoming – one senior woman staff member described it as almost “threatening” – because mean-looking men sat around, some of them ex-clients.

Karl Wilding, the National Council for Voluntary Organisation’s public policy director, said: “The fact that Kids Company was in receipt of government grants even after concerns had been raised about its management is more a reflection of its founder’s relationship with Whitehall than a representation of the sector more generally.” 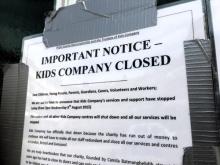 For Kids Company, the aftermath of its closure was complicated by the fact that different reports circulated about how many young people it actually helped – the charity claimed to aid 36,000 young people, but reportedly handed over records for only 1,692 clients in London and 175 in Bristol.

It would not be the first time a similar organisation, used by government to put “people in training” on its books to massage the politically-sensitive unemployment figures, had grossly over claimed its number of clients while officials conveniently  looked the other way.

Wilding commented the public should be cheered by the good work and huge difference that the vast majority of charities made every day and be thankful that “all charities aren’t Kids Company”.