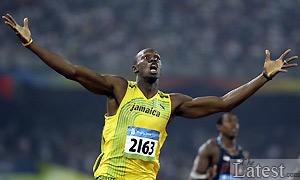 Jamaican sprint sensation Usain Bolt became man of the Beijing Olympics - minutes ago not only adding the 200m gold to the one he won for the 100m but again breaking a world record.

He is only the second male competitor in history to hold both records at the same time. The first was Don Quarrie the legendary Jamaican 200m champion of the 1976 Montreal Olympics. But 21-year-old Bolt exceeded the feat of his countryman who got a silver in the 100m at the Games in Canada.

Bolt's familiar showboating in the 100m race drew criticism from sports fans who were disappointed that his world record of 9.69secs would have been a lot better had he not slowed down. But today Bolt dug deep to power all the way through the race, which was into a head wind, and even dipped at the line eventhough his nearest rival was metres away from him to clock 19.30secs.

Moments later, Jamaica's Melaine Walker won gold in the women's 400m hurdles in a new Olympics record. A friend of mine from years ago, Natasha (or Tasha as she now prefers) Danvers, representing Britain, won a bronze with a stylistically magnificent run. Congrats also to Germaine Mason who landed a silver for Britain in the high jump. Guess where he was born? Yep, Jamaica which tops the table of athletics medals won at Beijing, ahead of mighty Russia, with four golds and three silvers.

World champion Britain's Christine Ohuruogu (an Ebo surname from Nigeria) won gold in the women's 400m which I hope will finally put to rest the bad publicity she got for being banned from competing after missing drug tests. Nigeria's Super Eagles are guaranteed at least a silver medal in the football competition.


Athletics aficionados can't wait for the sprint relay races where - according to current form - Jamaica should not just win in the men and women's 100m events but smash world records. The team has performed brilliantly considering they come from a small island nation of just three million people.

Judging by the texts and emails I have received, people throughout the world are dancing to reggae to celebrate Jamaica's success.

At the Beijing Olympics, Jamaican sprinting is as hot as the Montego Bay sun.

How racist is English football?