Linford Christie loves his 'lunchbox' when there's money in it 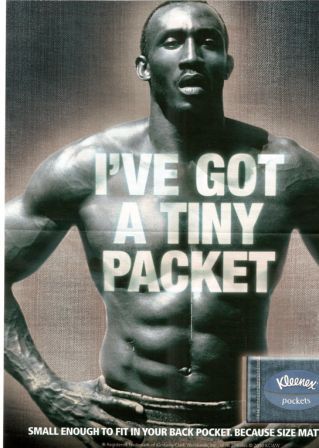 This was a euphemism used to describe the bulge of his genitalia on show in figure-hugging lycra running shorts and suits.

The term was coined in the 1990s by tabloid newspaper The Sun, infamous for its salacious, attention-grabbing headlines and topless Page Three women.

Judging by 51-year-old Christie's current bare-chested appearance in the advert for Kleenex pocket tissues and the use of the double entendre "because size matters" he's put "hurt feelings" behind him and decided to exploit his fabled "lunchbox" for commercial gain.

Christie's Olympic gold medal winning track career ended when he received a two-year ban in 1999 for taking a performance-enhancing substance, although he has always denied any wrongdoing. Less than six months before his first positive drug test Christie won a libel action against the journalist and celebrated ex-convict John McVicar.

McVicar had implied in the satirical Punch magazine that Christie's remarkable rise from 156th best 100m sprinter in the world to Olympic triumph in 1992 at an age when he should have been in decline could only have been achieved through the use of banned drugs. 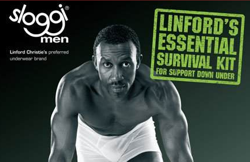 It was during the libel court case that Christie famously spoke of his main complaint against the press.

He said: "Linford's lunchbox is one of my grievances with the media. I don't like it…Nobody ever goes on about (Olympic gold medal winning hurdler) Sally Gunnell's breasts…I think it is disgusting, I don't like it at all."

Judge Mr Justice Popplewell, caused hilarity at the libel court hearing by asking of Christie: "What is Linford's lunchbox?"

However, in recent years, the shamed athlete appears to have come to terms with the "lunchbox" tag, disclosing his preference for briefs rather than boxer shorts and in 2002 becoming the "face" of Sloggi, the men's clothing brand, posing for advertising wearing only underwear.

Perhaps Christie's latest half naked appearance for Kleenex suggests that, with a tainted "star" status to contend with, and limited opportunities for lucrative endorsement deals and no TV sport presenting jobs anymore, titillating references to his "lunchbox" in ads can now be a nice little earner.

Who was it crying foul play not so long ago?