Day of Repentance. Known in German as Buß- und Bettag, it is public holiday exclusive to the residents of Saxony in the east of the country and previously controlled by the atheist Soviet Union.

Nowhere else in Germany is it celebrated as a statutory day off on a Wednesday in November. Generally it is used as a time to pray, reflect and spend time with family. 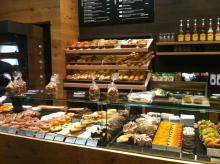 In the culture-rich city of Leipzig, teenagers took the opportunity to roam idly through the sprawling Hauptbahnhof railway station centre on their day off.

The only places welcoming customers were the odd restaurant and cafe, including Lukas’s, a large cafe chain with a plethora of bread rolls lining the back wall in all kinds of variations. The warmth inside - contrasting with the brisk autumn afternoon - matched the radiant orange lighting that highlighted the handmade pastries decorating the glass cabinets: pineapple cakes, almond squares and pink glazed donuts dusted with white sugar.

Large plant pots were dotted either side of the automatic sliding doors outside and filled with thriving plants spilling over the edges of their big pots. Several wooden tables ran along the pavement outside, each accompanied with its own ashtray and plants placed in mini buckets of primary colours.

A group of men, sat at the table on the left, talked and laughed freely in German, occasionally tapping at their cigarettes rhythmically into the ashtray. They noticed familiar faces at the table a few feet away, who yelled across enthusiastically before strolling over, exchanging hand shakes and slaps on the back. They left, not without thanking the barista collecting their mugs, and were soon replaced by a couple who quickly got lost in conversation. They huddled close together, eyes locked, leaving the steam from their lattes to get carried away with the breeze.

An Italian woman cradling a stack of magazines shuffled towards us, approached the couple who handed her some coins before coming to me. I gave her the loose change in my purse as she asked, “España?”

“No, I’m from England.” I smiled, as she continued to speak to me in Italian. The woman gestured toward the tram station, her facial expression pleading for what I could only assume was more money. I tried to explain that I’d given her all my change, but she remained, unmoving, hovering over my table. After a few moments of silence she nodded toward my cigarettes that lay in a packet on the table. I gave her one, which she lit, before thanking me and walking away. It soon dawned on me that I never did get one of those magazines. 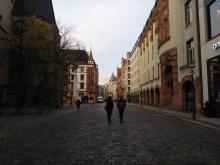 The sun began to set as I decided to take a stroll through the centre. Mostly couples remained in the otherwise deserted streets: peering into shop windows, pointing to this book or that slow cooker. The winding cobblestone streets, with equally archaic yet festive street lights, looked picturesque against the blushing sky. On my walk, I came across a man stood before a small crowd holding a wooden stick in each hand, connected with a knotted rope that created a sort of net. 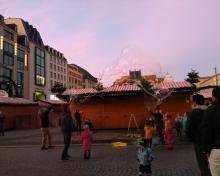 The knots in the net formed circular holes so that, after dipping the rope in his bucket of soap solution and pulling it through the air, he created a party of bubbles that blew over the heads of curious onlookers. Children watched in awe at the seemingly magical spectacle that unfolded before them. As soon as more bubbles were released, they giggled in a frenzy of excitement, chasing after the airborne marvels and waving about their small hands in an attempt to pop them. Parents stood by, phones held up to take pictures, grinning in admiration at the scene of sheer joy.

Then the bubble man switched to a different net with much larger holes. As he pulled the contraption through the air, there was a collective gasp from the crowd as an oversized bubble began to form. One particularly mischievous child decided to separate herself from the crowd, run toward the bubble and clasp it with both hands, causing it to pop as the soapy remnants splashed to the floor.

The man worked himself up into an exaggerated tantrum and stuck his lips out into a pout. The little girl giggled, which instantly diffused his faux temper. Bubble man broke out into a smile then reached for his net of smaller holes. He continued, this time running with the sticks as the children chased after him as though he were the pied piper. The bubbles floated away- the green and pink tint of the soapy spheres blending flawlessly with the sky, which had transitioned from blushing pink to a fiery blood orange.

NSA scandal: 'Europe would be better off without Britain'