'Majority of media coverage in UK is anti-Muslim' 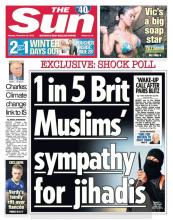 A groundbreaking report has found that the majority of British media negatively portrays Muslims. The Centre for Media Monitoring (CFMM) analysed almost 11,000 news articles, written in the final quarter of 2018, using 50 key words related to Muslims and Islam.

Research conducted by the group revealed that 59 percent of stories “associated Muslims with negative behaviours” and that terrorism was the most common theme.

It was criticised for an interview in which a conservative commentator claimed: “There are Muslims who want to come and get me for my Jewish blood.”

Overall the right-wing and religious press were the most hostile towards Muslims.

Christian Today, ranked as the second-most biased title in the study, ran a headline: “The European Church is sleeping while Islam is creeping in, says African bishop.”

BBC drama Bodyguard was also heavily criticised for pandering to “stereotypes of Muslim women.” The series was watched by an average of over 10 million viewers.

BBC Newsnight was also flagged for using far-right hate leader Stephen Yaxley-Lennon’s own image of himself being “gagged.”

Regional TV stations emerged as providing some of the most balanced coverage, particularly of local hate crimes against Muslims and the rise of the far right. 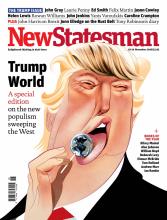 New Statesman journal as well as the iNews and the Metro newspapers were found to have the highest percentage of articles that had a “supportive bias” towards Muslims.

The Morning Star’s coverage was not included in the study.

CFMM is a newly formed unit of the Muslim Council of Britain. The organisation’s report was launched in Parliament this week by Labour MPs Naz Shah and Yasmin Qureshi.

Report co-author Faisal Hanif said: “As the first in a series of quarterly reports, CfMM hopes that by highlighting examples of coverage on Muslims and Islam, this can serve as a valuable resource for journalists and editors alike.”

The centre’s director Rizwana Hamid highlighted the goals of the newly formed team: “There is no doubt about the seriousness of Islamophobia within sections of British media.

“Even amongst the public, 58 percent believe the media is to blame for Islamophobia. The status quo has to change.

“Our goal is for there to be more responsible reporting through constructive dialogue with decision makers.

He said: “For the first time, we can get a complete sense of the picture of media reporting on Islam in the UK.”