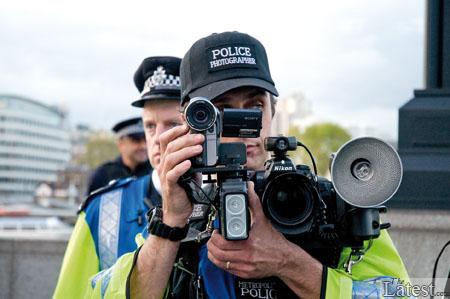 Angry photographers have demonstrators at Britain's police headquarters over a new law which bans people from photographing officers on duty.

According to section 76 of the Counter terrorism Act, anyone caught taking a photograph  "likely to be useful to a person committing or preparing an act of terrorism", will be arrested.

This led many protesters on Monday to wear a sticker with the slogan  "I am a photographer, not a terrorist." Professionals are worried that their work will be affected by the new act and consider it to be anti-democratic.

Paul Ashby, a leading National Union of Journalists (NUJ ) member, said:  "This is completely going against our freedom of speech. If you can't photograph something now, who knows if in the future we won't be able to write about it either? If you can't take pictures, who knows where this will end. Are the lines between photo-journalism and journalism being blurred?"

He added:  "It could stop actual journalism itself. What will be interesting is to see who gets arrested under the new law."

Photographer Nils Jorgenesen said:  "It's just pointless. We cannot stand and see the erosion of our own rights. It doesn't make sense either, because terrorists don't use photography. Anyone can take pictures so easily now, especially with mobile phones. Terrorists can pretend they are not and it is impossible for the police to know."

He concluded:  "But sadly, it's professionals with real cameras that get targeted." Mark Singleton is retired on health grounds. He said:  "This is a long overdue protest about the exercise of practising our own rights, because we are fed up of being assumed guilty. Just where is this going to take us?"

Mark Bullimore said:  "I was very interested in this and that's why I'm here. And I am surprised there are so many people. I think that the law is a very bad idea; it is the thin edge of the wedge before introducing full censorship. Controlling the media is equivalent to controlling people's thoughts." He added:  "I am certain that a terrorist wouldn't go around with a camera anyway. I assume they would want to be secretive about it."

Richard Hering said:  "I am glad to see lots of people have turned up.This law makes investigative journalism difficult. It affects not only the press but the rights of all citizens. And it isn't just paranoid speculation."

Ben Luscombe does photography as a hobby. He said:  "This event has been really good and has turned out to be really peaceful. With this many cameras, how many terrorists are there likely to be? It is not right to take away people's right to use pictures creatively as art, and to express themselves."

Johnny Armstead, a freelance photographer, said:  "It's not the job of the police to tell us what we can see or not see. We reflect what is happening in society and they can't just take that away from us. This is a third world dictatorship law; its appalling and a complete waste of time and money. How many terrorists have they stopped?

He added:  "Anyone can take photographs, so they are just fighting into the wind."

Truth about Hillsborough you didn't read on Sun's front page

Doctors death fears for cancer sufferers who are poor

<p><strong><u>Chris Gaynor</u></strong></p> Will this make tourists a bit weary when they are snapping away and a policeman accidentally ends up in the frame?