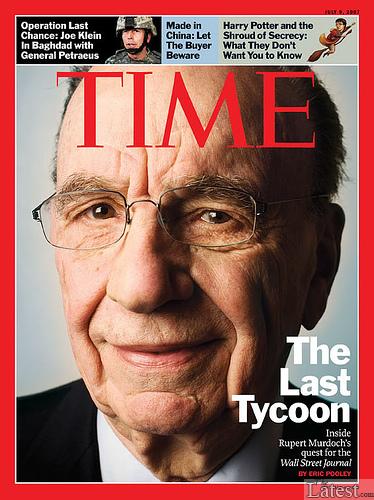 Global media mogul Rupert Murdoch has told a journalist on the American Fox Business Network television station he owns that US President Barack Obama is "not an extremist" but that his policies are "dangerous".

Billionaire Murdoch, 78, whose news media are well known for their right-wing bias, told Neil Cavuto yesterday: "I think Barack Obama would describe himself as a pragmatic leftist but he's not an extremist."

The serial meddler in politics, who some commentators say has influenced the outcome of elections in his native Australia and Britain, added: "I think he (Obama) sees himself as a president of change and that involves bigger government. He's made no secret of that and I think it's dangerous. I believe in low taxes and less government, if possible."

Murdoch, who at first backed Hillary Clinton when he thought she would win the Democratic Party nomination last year, is said to have brokered a "tentative truce" between Barack Obama, the presidential candidate who eventually won his enthusiastic backing, and the head of Fox News, on which he had refused to appear  after a row about bias. The network had regularly pilloried the Democratic nominee and, according to Obama, had "relentlessly portrayed him as suspicious, foreign, fearsome - just short of a terrorist".

Murdoch's change of his citizenship to American helped him buy profitable media assets in the US. He divorced his Estonian-born wife of 30 years Anna and married Wendi Deng, who is Chinese, at a time when he was expanding his business into the far east. He appointed Deng vice-president of   Satellite Television for the Asian Region (STAR).

"It's nonsense," Murdoch responds. "There was a lot of comment a few months ago when he lowered taxes everywhere in Italy, all business taxes, except on satellite television which he doubled. And he does own the competition, and that tax did not apply when he owned (the competition). That was business. Now we've not retaliated or said anything about that at all. I don't control what the editor of The Times of London says or the Economist says attacking him. The New York Times, God knows I have no influence there."

Tellingly, Murdoch quipped: "He (Berlusconi) is quite wrong. What about El Pais, the biggest paper in Spain, which has been publishing those very embarrassing pictures of him. We haven't done any of that."

Cavuto interrupted to say: "These are the pictures of the party he had with under-age..."

Murdoch butted in to gleefully use the word "parties", stressing the plural with a chuckle.

The political weight of the Sun, Times, Sunday Times and News of The World was put behind Britain's Labour leader Tony Blair after Murdoch summoned him for a meeting in Australia prior to the 1997 election that Blair won. Murdoch's price was said to have been an undertaking from Blair that he would not threaten the near monopoly business interests of News International (the British arm of News Corporation) and would not abandon the pound for the Euro. Now Murdoch scents that the UK's Conservatives look likely to win the next general election he has met with their leader David Cameron, his papers have switched allegiance and daily they attack prime minister Gordon Brown.

The News Corporation boss's huge empire, which includes the UK satellite broadcaster SKy TV, is said to pay minimal tax, and the British government look the other way rather than dare challenge him over it. He has proved himself remarkably cutting edge in his vision for the future of the media. He owns the social networking site MySpace whose advertising, combined with its parent company Fox Interactive, he says is "more than double what Facebook has".

He predicts that, because of digital advances,  in 20 years time "we won't have paper and ink and printing presses...I think it's a generational thing that's happening. But there's  no doubt that younger people are not picking up the traditional newspapers."

Murdoch adds: "We think of newspapers in the old-fashioned way, printed on crushed wood so to speak, with ink. It's going to be digital. Within 10 years I believe nearly all newspapers will be delivered to you digitally either on your PC or on a development of the Kindle, shall we say...something that's quite mobile and you can take around with you."

When asked whether DirecTV head Chase Carey, returning to News Corporation to serve as the company's number two executive, was his "heir apparent," Murdoch responded: "No, we're not making any commitments on that at all. Chase is coming in to be my partner and right-hand. He was with us for 17 years before, I think. It's like coming home."

Indians say 'we've never had it so bad'

Cute: but are pandas the world's most useless animals?

MoveOn rallies against ‘sell-out’ on health care by US Democrats