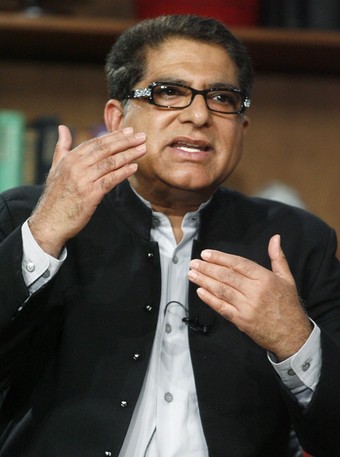 Deepak Chopra is unique in that, unlike many other spiritualists, he enjoys living in the the 21st century. He is a physician, lecturer and celebrity who has published over 50 books and written numerous articles on spirituality and mind-body medicine. Chopra has been dubbed by The Times as “the poet-prophet of alternative medicine”.

He does not keep his wisdom to himself. Following Mahatma Gandhi, the historical spiritual leader of India and his principle of “be the change you want to see in the world”, Chopra is constantly trying to help people.

He is innovative because he associates human consciousness and technology, and is thus immersed in both the past and present.

“Technology is unstoppable. It must be part of the evolution of human consciousness because we can’t stop it”, he explains at a recent conference at the popular Borders bookstore in Leicester Square, central London.

He also states that, at the same time, technology is neutral. “You can use this” he says, picking up his mobile phone, “to cut off electricity in London or cause a nuclear plant to leak or to hi-jack a plane.

“But perhaps you can use this to bring people together, so that they can go into those depths like the ancients did.”

Chopra says that consciousness has “no beginning in time, no ending in time, no limits in space. Fire cannot burn it, wind cannot wet it, air cannot dry it. It’s ancient.”

The notion of consciousness is his favourite topic.

He says: “If we collectively use local technologies like cyberspace or the social networking website Twitter, we could for example say tomorrow at 9 o’clock Greenwich time, everybody take one minute of thought for peace and harmony. If it was done properly, and you went in a quiet space and did it, you would actually change the world.”

Chopra gives another example. “Three days ago somebody twittered and said ¨I want a really good relationship. How can I find the right person? ¨

He adds: “I have been there, done that, and now I want to be a connector.”

Chopra is influencing many people to leave the daily flow of life to one side, now and again, and to be at peace with oneself. “Success is the ability to love and have compassion”, he told me as he made his exit at the end of the event.

Destitute and desperate: Male prostitution on rise in Lebanon

2 Responses to "Modern-day spiritualist talks about consciousness, technology and love"

<p>Deepak Chopra! Of all people to praise? That man, is a supreme product of capitalism...knowing what exactly to sell, and who exactly to sell...preaching a mixture of supremely contradictory philosophy, starting from Buddhism to Kabballah, and Islam... The man who left his motherland, right in his youth, with all the bigtalks of spiritual upliftment of the poor and the downtrodden...is surely not a role model I would like to look upto...</p><p>And I hope you have heard the name of Joyce Weaver? Too bad money can buy justice these days...I guess I would like to share this as well with you...</p><p>&nbsp;&nbsp;<a href="http://online.wsj.com/article/SB122809544395968075.html?mod=rss_opinion_main">http://online.wsj.com/article/SB122809544395968075.html?mod=rss_opinion_main</a></p>

<p>Evolution of technology had made a significant impact in global ecocnomy. Actually , robot as product of technology has reached a remarkable recognition in Japan. The International Robot Exhibition, which happens every two years in Tokyo, is the place for researchers and inventors to show off incredible robotic creations used for numerous purposes. One group, from Waseda University, displayed one that might help cure snoring in a technologically remarkable yet totally adorable way. The Jukusui-Kun, or “Deep Sleep,” system utilizes a robotic bear that is used as a pillow and utilizes sensors and robotic arms to get a snoring person to turn over and quit making noise. Source for this article: <strong><a href="http://www.newsytype.com/13514-robot-bear/">Japanese inventors release robot bear that could curb snoring</a>.</strong></p>