Move over Bernstein, Gershwin's in town - Paris that is 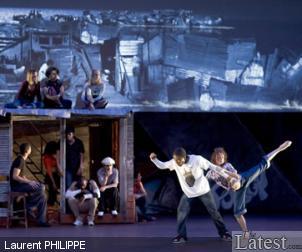 There's a show about a very special American in Paris currently running in the French capital, and rather appropriately it's called Good morning, Mr Gershwin.

For those of you still missing the far too clever link (self praise is no praise) the 1951 musical film of that name was of course inspired by the 1928 orchestral composition by the great man himself.

Anyway back to the present day and it's more dance and a review of a show from an already self-confessed possessor of the proverbial two left feet.

What a show and what a performance!

In fact it's a great deal more than "dance" as perhaps would be expected from the choreographers JosÃ© Montalvo et Dominique Hervieu.

Quite simply put, the pair are magicians who give new meaning to tripping the light fantastic.

What they manage to put together in this (and other productions) breaks barriers and leaves anyone lucky enough to get to see one of their creations jaw-to-the-floor in open-mouthed admiration.

Good morning, Mr Gershwin is of course a tribute to the life and times of the 20th century American composer, and as always with Montalvo-Hervieu it combines modern and classical dance with their trademark visual effects - more on that in a moment.

What is particularly extraordinary about this production is that it blends a variety of dance styles, which would on paper at least, seem incompatible - tap with ballet, hip hop with mime, or jazz with break - all set to the music of Gershwin of course.

But it's a mix that more than works, blurring the lines of rigid categorisation and making anyone watching appreciate that dance is a language in itself.

Actually that's probably one of the real beauties of Montalvo-Hervieu. Their productions break all those linguistic barriers that might make film, theatre or even lyrical music impenetrable or at least leave something lost in translation.

With Good Morning, Mr Gershwin - and probably dance in general - there's little fear of that happening, with the interpretation being left entirely "in the eyes of the beholder".

And that's a fact worth remembering given the (minority) reaction of one little ol' lady who clearly felt she had "missed the point" (as if there were one) when she was heard to mutter audibly on leaving: "Well that was a waste of an afternoon".

Good Morning, Mr Gershwin also has of course those visual "effects" - Montalvo-Hervieu's trademark use of video as a backdrop.

Sometimes it's synchronised with what's happening on stage, other times it adds a completely different dimension, which might leave the onlooker wondering what the connection is.

One thing's for sure though, it never detracts from the overall enjoyment of the performance, although it has to be admitted that at times it would be useful to have more than one pair of eyes.

Scene follows scene, but it's not just dance. There are moments of humour that leave the audience grinning from ear-to-ear, such as one performer mockingly gargling along to one of Gershwin's best-known tunes, or the temptations of a chocolate eclair (via video) which is almost made to perform its own dance routine away from the expectant mouth of the woman salivating to enjoy.

A good chunk of the second act is dedicated to Porgy and Bess - so it's a bit of a reworking of last year's production by the same company at the OpÃ©ra de Lyon.

But something worth seeing once is just as good second time around, so there can be few complaints on that front.

The one down side perhaps is the venue itself.

Le ThÃ©Ã¢tre national de Chaillot is housed in the Palais of the same name, (re)built in the 1930s and looking every much "of its time" from the outside.

The setting couldn't be more stunning, perched at the edge of arguably the French capital's swankiest arrondissements (XVI) with an impressive view of the Eiffel Tower.

The inside of the building leaves something to be desired though, stark and uninviting, and the auditorium for the performance is somewhat "industrial" in its overall feel, with uneven steps leading down a pretty steep drop with the whole framework juddering as people make their way to their seats.

Maybe Montalvo-Hervieu will breath much-needed new life into the building though as well as the productions performed there as last year they were appointed joint directors with the emphasis being to promote dance.

Explosive portrayal of race and gender in 1950s America

Why Didn't The BBC Get This Joke?