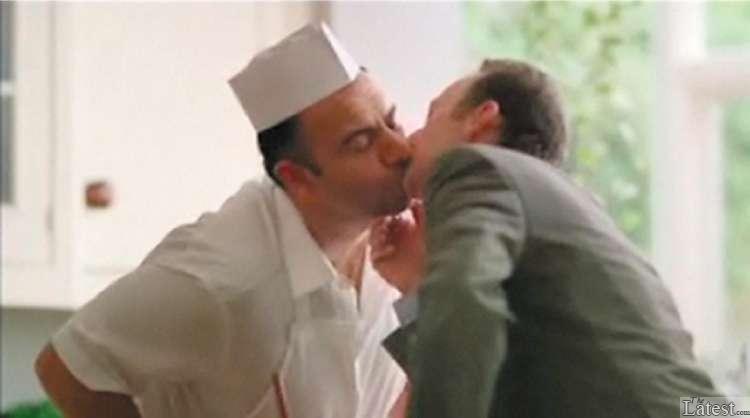 The commercial was withdrawn by the American multinational after the UK's Advertising Standards Authority (ASA) received more than 200 complaints from television viewers who it said they found the quick kiss goodbye "offensive", "inappropriate" and "unsuitable to be seen by children".

The light hearted advertisement depicts a classic morning scene at a family home as the children pick up their sandwiches for school. "Mum", however, has been replaced by a male New York deli worker clad in a chef's hat and apron. As the father of the house grabs his sandwich and bids goodbye with the words "See you tonight, love", the deli worker looks affronted. "Hey, ain't you forgetting something?" he says as the father returns to give him a peck on the lips, calling after him: "Love you. Come straight home from work, sweet cheeks."

The commercial also caused outrage in the US where the notoriously reactionary Fox News host Bill O'Reilly complained: "I just want mayonnaise, I don't want guys kissing." A spokesman for the ASA said it has yet to decide whether to investigate if the commercial breached its rules, adding: "Homosexuality in itself is not a breach but they could look at it from the point of view of taste and decency."

Ben Summerskill, the chief executive of the gay rights group Stonewall, urged its supporters to stop buying Heinz products. "We're shocked that an innocuous ad should have been withdrawn in this way. "Our phones have not stopped ringing with supporters who are deeply upset. I think people are a surprised they have responded so swiftly to what appears, on the face of it, to be organised complaints, a campaign by people who are determined to be outraged whenever there is any reference to homosexuality, however light hearted."

He pointed out that a recent billboard campaign by Stonewall featuring the words "Some people are gay. Get over it!" had attracted approximately 100 objections in three days in what they believed was another targeted attack. The Heinz advertisement was actually banned from being aired in or around children's programming, because it fell foul of Tv regulator Ofcom's ad restrictions relating to products that are high in fat, salt and sugar.

MP Diane Abbott's Early Day Motion tabled in the British parliament states: "That this House notes that the manufacturer Heinz has withdrawn its television advertisement, which features two men kissing, on the basis of 200 complaints that it might be embarrassing for parents with children to watch; further notes that millions of children watch depictions of same-sex relationships in soap operas every day; further notes that the advertisement was not intended to be a realistic depiction of a same-sex relationship, and that the advertisement was intended to be humorous; believes that Heinz's decision was ill-considered and likely to offend millions of gay, lesbian and transgender people; and calls on Heinz to reconsider its decision".

Abbott, a single parent mother of a teenage son, has always denied rumours of a dalliance with a woman.