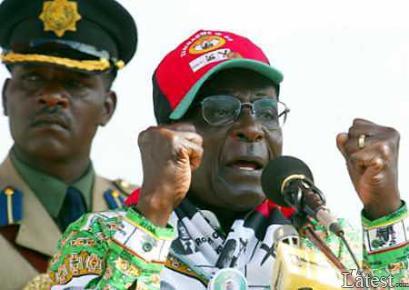 Is it only me that's wary of people who have Hitler moustaches and wear bright green suits covered with pictures of themselves?

To be honest, I don't think even Screaming Lord Sutch, rest his soul, would have stooped to such lengths of crimes against fashion - not even if he went on a rampage of slapstick terror to silence his critics in an election that would still amount to a one-party vote.

Yes, you guessed it - another Uncle Bob story. Mugabe, the lovable Rhodesian rogue, continues to walk the earth, much to the chagrin of most of the world.

The UK and US, backed by France, Italy, Belgium, Croatia and a few others, failed to secure sanctions against the leader of ZANU-PF. This was because, rather fittingly, those bastions of free and fair democracy - China and Russia - decided to veto the UN sanctions that should be imposed on Zimbabwe.

China have had their hands full trying to stamp down on any notions of a free Tibet, using a flame to attract the moth-like proponents of freedom in all corners of the globe to get them arrested. Quite clever, really, if not brutal. Usually I don't like the Olympics on the grounds that it's a warm version of its superior, the Winter Olympics, which is infinitely more entertaining.

Russia is still under the umbrella of ex-KGB superstar Vladimir Putin and his marionette understudy, Paval Medvedev, in a regime that poisons former agents on foreign soil, and gets annoyed that we make such a big deal of it. And literally flies fake penises to mock Garry Kasparov, the chess grandmaster and leader of the government opposition group the Other Russia Movement. In May, a political assembly of his was disrupted when a large phallus-shaped toy helicopter started buzzing around the room. The Moscow Times newspaper attributed the prank to "a couple of pro Kremlin Young Russia activists".

These historic giants, backed up by the other great free states, Vietnam and Libya, have sought to keep Robert Mugabe away from the wrath of the rest of the world.

Oh, and South Africa vetoed too. Remember them? You'd think that after rightfully being heralded as the true free state (as opposed to the Orange Free State) in the 1990s, they'd do something. Even Nelson Mandela's a bit wound up, which is something that I thought was an impossibility.

South Africa opposed the vote due to their belief in a future national Unity government in Zimbabwe; a government that would bring together Mugabe, the dictator, and his plucky opponent Morgan Tsvangirai, who is only still alive because he is in the public eye too much to be quietly bumped off. Yet he still had to hide in the Dutch Embassy as soon as he pulled out of the re-run presidential poll, while his supporters were rounded up and beaten.

Personally, I don't think pulling out of a cricket test match with Zimbabwe is enough to show our disgust at the current regime. Still, the news presents the coverage as another pseudo-Cold War in a backdrop of worldwide terrorism, with the US and UK joining together again to vanquish the evil and unjust elements of human society. There's hardly been any mention of other European countries joining us - just the supposedly ex-Communist opposition that fought us in the post-war period.

It's almost as if we're the bullies in all of this. The global news is becoming easier by the day for Mugabe to spin, somehow holding on to supporters with a million per cent inflation rate, empty supermarkets, employment that pays workers through bartering and the imprisonment of gay and lesbian elements of society for behaving "worse than dogs and pigs".

The rest of the adult population are coerced into voting, branded with indelible ink to prove to the armed mobs that they posted their vote even though they didn't need to. The only pictures on our television we get are of propagandised amassed crowds which have, as we're told by many independent sources within the country, been forced to attend the poll.

The only solace many opponents take from recent developments is that, at age 84 in a country that has a life expectancy of 37 (dropping from 60 in1990), Mugabe will most likely be dead soon. Sadly, when he goes there are a number of like-minded Zanu-PF strongmen to take his place.

1 Response to "Mugabe's crimes against fashion"

<p><strong><u>Chris Gaynor</u></strong></p> Personally, I think Mugabe must be rubbing his hands with all the media attention he has been getting. And I don&#39;t mean that in a sick way either. But, I just feel that the more the media bow to his level, the more he will continue to play mind games with the democrats of this world. He obviously feels he has a divine right to rule Zimbabwe, and until God has spoken he is the ruler. Unfortunately, the ranting politicos who preach about democracy, were quick to invade Iraq, but, are not so quick to invade Zimbabwe. I wonder why?