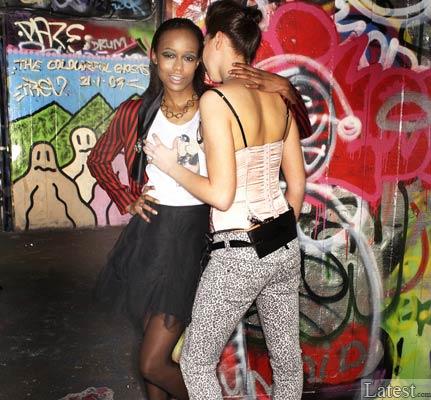 Episode three definitely started off with a bang. Ok, so it looks like I completely over-reacted over some stupid smelly mackerel (which may have a little truth to it) but my televised outburst had deeper roots.

Chloe might look like the sweet innocent Liverpudlian, but she can be very manipulative and she likes nothing more than to "shit stir". It was extremely frustrating, especially when there were cameras around you catching your every move, which could be edited any which way. And that is all I'm going to say about the matter.

"Time for the chop" was Lisa's words in her mail to me. It's makeover time. I've been a little anxious about this point. I know that hopefully they will choose a hairstyle for me that makes me look my best, but what if they think my hair would look good in a shaven boy cut? I think I will have a heart attack. But thankfully it wasn't as drastic as that, just a bit of a colour change and a chop, chop to make my Afro rounder apparently.

I was quite impressed that I didn't make a fuss, especially considering this was my first proper hair cut. Even if I did I don't think it would have been anything compared to Maddy's strop about her hair makeover. Bless her. I'm sure she will like it soon.


Let's move on to the best challenge ever; dancing at the prestigious West End club Movida. I was completely in my element here, being a professional dancer, and Sophie was right, I was probably showing off just a little. But can you blame me? Partying the night away was much needed after the stress of the first week in the house and the competition.

We were thrown head first right back into it the next morning on London's South Bank when we were greeted by two women "full on" kissing. To our horror our photographer, Nicky Johnston, told us that we would be kissing each other in our photo-shoot this week. And guess who was my partner, Chloe.

I didn't make a big deal about it because it's a job at the end of the day and personal issues shouldn't come into it. The styling for the shoot was very funky and retro and I really liked my look, especially with my new hair. It was time for Chloe and I to walk onto the set and I could tell she was extremely nervous.

I really wanted to recover from this to get the best shot possible and I tried. But it was so hard since Chloe just wasn't willing to work with it, however I can't blame my "not so good" photo on her. And let me just clear something up, Chloe and I did not kiss. Tv land just thinks it's funny to make it look that way. Although, now that I think about it, she did have her hand on my boob. What is this? Britain's Next Top Naked Lesbian Model?


Elimination was stressful as usual and I was a little disappointed in my photo. I think my hand looked extra long and my body a little on the dodgy side. But, being positive, I'm learning and planning on improving. I was so thankful when Lisa called out my name meaning I would be going through to the next round. But not so happy when Ashley was in the bottom two, with Chloe; I really didn't want to lose another room mate (Ashley had moved in after Lisa- Ann's elimination) and I certainly didn't want Chloe to stay.

To everyone's shock and frustration both Ashley and Chloe were allowed to stay, no one was eliminated. How utterly annoying that after a week's hard work, I was still in the same place. I mean, I love Ashley to pieces but Chloe, really? Oh well, the life of modelling and Tv is hard. I guess it's time to get over it and prepare myself for the next sticky situation. I know it's going to be emotionally challenging. I hope I can handle it.

To see how I cope and attempt to inspire a group of teenagers, tune in on Monday at 9pm on Living TV.

How The-Latest is available on the move

Tears of joy and sorrow in the frozen north