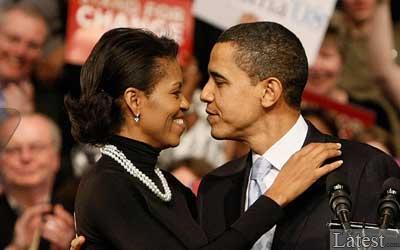 Barack likes to tell a story about the two of us standing backstage before his now famous speech at the 2004 Democratic Convention.The way he tells it, he was too busy in the days before the convention to feel any pressure - but about an hour before the speech, I could tell he was getting a little nervous.

To break the tension, right before he went out on stage I leaned in close and said to my husband: "Just don't screw it up, buddy."

We laughed. And then Barack brought the house down.This year, the house is going to be a lot bigger. More than 75,000 people will be in Denver to be part of this important moment, and I want to tell you about an opportunity to join Barack backstage before his acceptance speech.

Ten supporters who make a donation in any amount by midnight this Thursday, July 31, will be selected to fly to Denver, spend a couple of nights in a hotel, participate in the convention, and go Backstage with Barack. Each supporter who is selected will also get to bring a guest along to share the experience.

If you make a contribution of $5 or more today and you could have your own Backstage with Barack story to tell. Barack's speech at the convention will be a culmination of the unlikely journey that has brought all of us so far over the past 17 months.

He will call on us to come together and work for change - not just to win this election, but to make things better for all Americans. Seeing it in person will be a once-in-a-lifetime experience. I'm excited about being there and I hope you are too.

My alarm over Obama's 'classroom spies'

Britain's 'build them up to knock them down' celebrity culture