Tackling the hugely political and emotive issues of race and mental health would not be an easy task, even for an accomplished storyteller. But that is what first-time author Siddy Shivdasani has done in his brave and searingly frank self-published, semi-autobiography Melting Pothead.

It’s a hard read in parts. The book is a passenger ship tossing the reader around the rough seas that are the events of the author’s remarkable life. Sometimes the book is chronological and at other times it jumps around, perhaps, in so doing, candidly reflects Shivdasani’s state of mind. 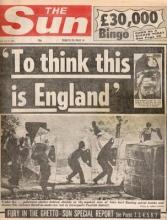 When the first chapter opens with the dramatic unfolding of his first mental breakdown and subsequent detention in a psychiatric hospital, it is easy to see how Melting Pothhead could in some way be cathartic for the author. A former Fleet Street journalist, who worked in the belly of the Rupert Murdoch empire for many years, Shivdasani allows the reader entry into his world of drugs, addiction, violence, poverty and bipolar disorder with a series of recollections and stories often told in a style and rhythm that is characteristic of a tabloid newspaper reporter – sharp, concise and to the point. Florid language would be inappropriate to describe survival on Brixton’s notorious Frontline, in south London, UK, the

Black youth uprisings of the 1980s, or the harsh reality of his travels and work in Beirut and other parts of the Middle East and India.

By his own definition and on his terms, Shivdasani is an Anglo-Indian who is politically Black. With an Indian father and a white, middle-class English mother, race and prejudice are dominant themes in Melting Pothead. Each of his personal encounters and relationships, from early on at school to his work in top newsrooms, are viewed through the dynamic of ethnicity. He confronts the painful realities of the racism he experienced, including from white relatives, head on. His book will no doubt make uncomfortable reading for some people.

Shivdasani writes poignantly about how he was sectioned in a psychiatric hospital for a second time – a period he regards as “incarceration”. However, a lack of introspection about his illness makes it difficult for the reader to understand how he has attempted to manage his bipolar disorder and the side-effects of powerful medication, as well as the impact over time on those close to him.

Melting Pothead’s last few chapters are revelatory for the sensitive and compassionate way in which the author is able to use prose to portray deeply troubled times with Peso, his estranged drug-dealing, wideboy, charismatic father. Shivdasani did not like Peso but he

loved him. Apart from his father, the author writes little about his mother, sister and brother. Women are sometimes objectified in a pub laddish way. But Shivdasani waxes lyrical about the influences of the “Black music” of rap, hip hop and soul on his life, displaying an incisive knowledge and understanding of these culturally important genres.

In a section of the book called "Drive-by of thoughts", Shivdasani explains why political rap culture is misrepresented and, in his words, "wrongly underestimated". He admires American hip hop artists Ice-T and Dr Dre. He says that "Ice-T was all about getting out of the ghetto" and quotes from his 1991 track Escape from the killing fields: No one wants to live in an urban war, you live there cause your parents were poor...Ya gotta get out! Why? Cause the fields are where you die.

Shivdasani shows he can be an accomplished writer of prose too. But, in Melting Pothead, he has not yet fully made the step-change from being a successful headline-writing sub-editor on The Sun, Britain's biggest selling "red top" tabloid newspaper, to skilled non-fiction author. The two are very different disciplines.

It is ironic Shivdasani had to go to India, his ancestral home, to pay to get the book printed. I have to say, the publisher, White Falcon Publishing, did a really professional job. If Shivdasani got a good editor on board, the book could deserve to be one a publisher pays him for a potent labour of love.

* Read Siddy Shivdasani's own story about the book.