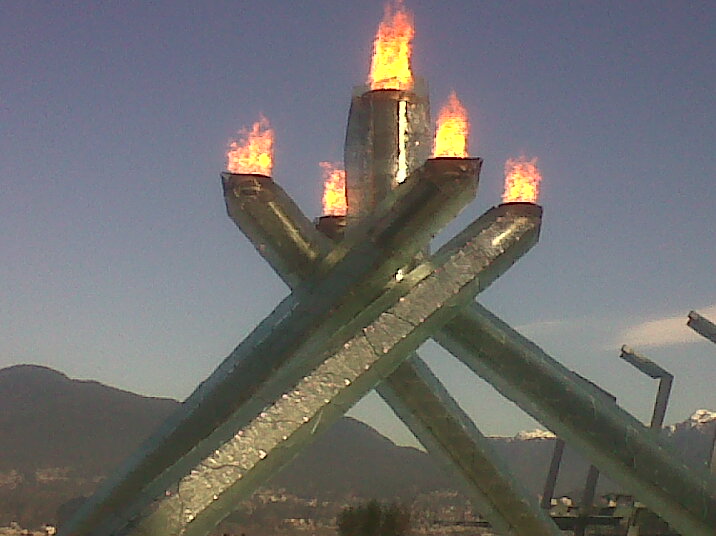 After a 10-hour flight, and an eight-hour time change, I am finally in Vancouver! I arrived in the Olympic hotspot Thursday afternoon (weirdly enough leaving London Thursday afternoon) and hit the ground running.

All I want is to see, touch, hear, and experience everything I can that is the 2010 Olympics. Mainly, I just want to go to as many events as possible, and party (excuse me - network) with people from around the world.

I really wanted to see the Canada v Switzerland ice hockey game tonight (which, after overtime and a shootout, would have been an amazing match), but my flight got me in a tad too late to get last minute tickets.

Instead, I dropped off my bags at my uncle's house and headed to Pacific Colliseum in search of men's freeskate tickets. Being a medal event, I knew it would be pricey, and also knew I would be dealing with scalpers.

Little did I know that those tickets were selling at around $300-$500 (Canadian) even after the event started. AND they were for obstructed view seats. Looked like Julie wasn't going to see Canadian champion Patrick Chan skate after all (but, my claim to fame here is I used to figure skate with him years ago).

Curling's not that bad, right?

Feeling disapointed and extremely jet lagged, I went up to the official Olympic ticket counter and asked what they had left (in terms of figure skating, speed skating, and curling - my only three choices). I managed to get a ticket to the women's freeskate practice (a manageable $30 Canadian dollars, the price of a cocktail at Mahiki), and a ticket for the Canadian women's curling qualifier.

Yes, curling. I know, it's an old person's game, like croquet on an English village green, but hey, as a sports reporter I have to love them all, and I do!

I haven't made it downtown yet; not enough hours in the day. Wait - I've been up for 24 hours now...Anyway, Robson Street, in downtown Vancouver, is where all the action is during the day and night, and I plan to head there tomorrow and to see the Olympic flame.

I've also got plans to see the Sweden v Belarus men's ice hockey game. Saturday I'll head up to Whistler, 30 kilometres away and in the mountains, for some snow-related events (one hopes...) and then back down to Vancouver for next week.

Boy, does it feel good to be back in Canada. Yes, I was here less than a month ago, but the spirit of the Olympics and everyone wearing our national colours of red and white is just so amazing.

You'll all see this in 2012 at the London summer games - there is something so amazing about the Olympic spirit. It brings people together and makes you more patriotic, yet accepting at the same time (maybe the British media would think otherwise).

Looking at the news media really showed me how diverse the Olympics are. We are inundated with images of different countries attending and competing at the Olympics, but sometimes it takes just one experience of actually seeing it to believe it.

For me, that was today's flight . On board my flight from London to Vancouver I could see people wearing Olympic gear from Russia, Poland, Estonia, Canada, the USA and most noteably Sweden.

As I was decked in Canadian attire, two people even asked me if I was an athlete (highlight No.1). When the pilot welcomed everyone to the Olympics, the entire plane cheered and clapped. I could feel the energy beginning, and the sight of the beautiful Rocky Mountains outside my window helped a bit!

I'm currently compiling some video footage and will have it ready in the next 24 hours. My new Flip cam, courtesy of extra waiting time at Heathrow airport's duty free, has allowed me to capture much more footage than possible with my Blackberry.