As Elon Musk’s $44bn takeover of Twitter sends users and media outlets into a frenzy, there have been mixed reactions from citizens of Nigeria, Africa’s most populous country.

;For its estimated three million Nigerian users, Twitter has come to be an important civic space to hold the government accountable and mobilise for political and social causes.

Last year, Twitter, under its past CEO and founder, Jack Dorsey, came under fire from the Nigerian government, which banned the platform from operating in the country for seven months.

A section of Nigerians believe that the company’s new leadership under South African-born Musk, noted for his “free speech” rhetoric and less politically progressive stance than Dorsey, will not stand with them in their time of need.

“Essentially, as a Nigerian, Twitter is a very important platform for us,’’ Uloma Nwoke, a 26-year-old digital strategist told Al Jazeera, “And Jack stepping down and the company being taken over by a person who has not shown that he really cares [about political movements] is very disturbing.”

From #BringBackOurGirls, a rescue campaign for more than 200 schoolgirls kidnapped by the armed group Boko Haram to #EndSARS, a movement against police brutality and extrajudicial killings in Nigeria, Twitter has emerged as a major rallying tool for the youth.

“Twitter was very crucial during the ENDSARS protests,” Nwoke said. “And it is not because it was Twitter, we know that it was Jack that did that and I don’t see how someone like Elon will key into the political struggle of oppressed people in their countries.”

Others said Musk’s entrance into the scene is a triumph for freedom of speech and information.

The Twitter ban mirrored a growing international trend – other countries like India, North Korea, Iran and China also censured the network, as users pushed its mobilisation capacity to the lim

In Nigeria, the ban was only lifted in January after an undisclosed agreement was reached with the government. During the ban, information minister Lai Mohammed cited China as a reference for the government’s actions.

“For example, in China, social media is being regulated and such a thing is not in Nigeria, and we have all those agencies that are capable of the regulation in the country,’’ he said at a news conference last year. 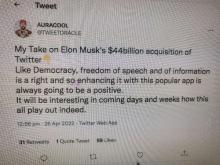 With the Nigerian government looking to regulate social media platforms, it is still unclear how Musk’s emergence might help the government’s censure plans.

Tomiwa Ilori, a doctoral researcher on internet freedom at the Centre for Human Rights, University of Pretoria,*-/ told Al Jazeera that the position of the Nigerian government and Musk’s philosophy are at odds.

“This is because the Nigerian government claims it wants to rid social media platforms, including Twitter, of online harms – even though this is not the case – while Musk cares little about such harms and would rather allow all kinds of speech,” he said. “This could provide the Nigerian government with the excuse of clamping on social media platforms because all kinds of speech are allowed.”

Ilori added that Musk’s stance as “a free speech absolutist” is a luxury many Western countries can afford, but not Africa. 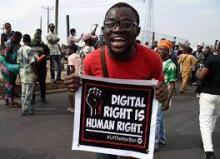 “There are complex political, historical and cultural contexts that influence speech in many non-Western systems such that there has to be some level of limitation on expression, especially under international human rights law”, he said.”

“For example … online hate speech has been allowed to fester on social media platforms in Ethiopia. Countries like Russia also nest troll farms in countries like Ghana to manipulate online information and derail elections in African countries. Actors like Twitter cannot afford to be a free speech absolutist in such instances.”

* This article first appeared on the Al Jazeera website