Obama: “People Don’t Feel I’ve Changed Washington”
American President Barack Obama conceded recently that his campaign message of changing the way Washington works is not viewed by the nation as a fulfilled goal.
Asked in an interview by Colorado’s 9NEWS to judge his ability in the first two years of his presidency to alter what has long been characterised as a Washington that is broken, Obama admitted that people saw progress as minimal, but said that he had actually made some ground on the issue.
“I don’t think there’s a sense that I’ve been successful, I think that people feel that Washington still is dysfunctional,” Obama said, before challenging that sentiment. “We’ve actually made some improvement, mainly in areas where I’ve got complete control.”
Obama explained that he had taken measures to make the White House more transparent, improve the flow of information to the American people, and cut down on lobbyist influence on his administration, but that actually repairing Washington in the way people wanted to see it fixed would take a more concerted effort in the next two years.

US President Barack Obama has conceded that his campaign message of changing the way politics in the nation's capital works is not viewed by Americans as a fulfilled goal.

Asked in an interview by Colorado’s 9NEWS to judge his ability in the first two years of his presidency to alter what has long been characterised as a government system in Washington that is broken, Obama admitted people saw progress as minimal, but said that he had actually made some ground on the issue.

He said: “I don’t think there’s a sense that I’ve been successful, I think that people feel that Washington still is dysfunctional.”

He then challenging that sentiment by adding. “We’ve actually made some improvement, mainly in areas where I’ve got complete control.”

Obama explained that he had taken measures to make the White House more transparent, improve the flow of information to the American people, and cut down on lobbyist influence on his administration, but that actually repairing Washington in the way people wanted to see it fixed would take a more concerted effort in the next two years.

Monumental opposition to Obama's controversial compromise deal with Republicans which saw him cave in to George Bush-era tax cuts for the rich, came from the Senate's sole Socialist member Bernie Sanders. The Senator attempted to derail the plan by filibustering for eight and a half hours non-stop.

For progressives like Sanders Obama's policy score card is not impressive. Obama may have bravely pulled off a victory in getting a law passed to allow openly gay people to serve in the US military, but there are still thousands of American troops in Iraq, despite Obama winning the presidency on an anti-war ticket, and thousands more have been put into Afghanistan by him. Also, the Guantánamo Bay concentration camp he promised to close in his first year is still open.

To be fair, Bernstein has publicly stated that Obama inherited the worse situation of any American president since the Great Depression in the 1930s.

How far has Obama's election campaign slogans of "hope" and "change" been realised two years into his presidency? 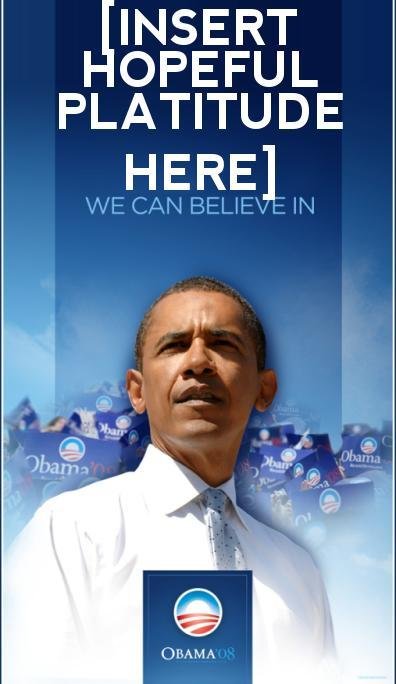 Sometimes our words, even those which attain iconic status like Obama's message of "hope" and "change" used during his election campaign in 2008, can haunt us later especially if, as in the case of Obama, they are hijacked by opposing forces to hold us to account.

It is further ironic that the internet, the very medium used expertly by Obama and his team to nurture and galvanise a wealth of support in his bid for presidency, should now be a focus for dissention on blogs, forums and websites about the apparent failings of his policies and character as president. Here The-Latest provides a snapshot of what's being said on the web:

Liberal bloggers are bringing down Obama, part two: It's not the economy, stupid, it's Obama's character writes Peter Daou on his blog. Daou was senior online advisor to Hillary Clinton in 2006 and in 2007 was named Internet Director for Hillary Clinton for President.

He says: "Setting aside all the campaign slogans about hope and change, what Obama really signifies is a razor sharp break from Bush, Cheney, Yoo, Rice, Rumsfeld, Addington, Libby, Bybee et al.

After eight years of damage to the fabric of our Constitution and our nation, the entire point of a new face, a smart, youthful, inspiring Democratic president is to completely and totally reject the Bush years, to reject the lawless behaviour, the Orwellian rationales, the blatant disregard of the Constitution. Neglecting to do so, and leaving any doubt about where Democrats stand on these issues, is profoundly detrimental to the country."

Daou adds: "This was about Obama’s character, not just his policies, about moral courage and conviction - and the lack of it. The right, led by radio blatherers and the still potent rightwing attack machine, had their sights on Obama’s character from the very beginning.

They were bent on destroying him. It’s when the left began conveying doubts about his moral authority that the warnings signs should have started flashing in the West Wing.

The health care debate, with the left’s profound disappointment over the public option and the right’s overwhelming antipathy to a “government takeover” permanently defined and enshrined the previously inchoate impressions of Obama as a man whose obsession with conciliation rendered him incapable of taking an unshakable stand in defence of his principles.

This is how I see the steady unravelling that has led to Obama’s steep drop in the polls and the deflation of the hope bubble. So even though a better economy would improve his standing, to reduce his problems to a poor economy is a gross oversimplification."

What Reagan had and Obama needs: Optimistic slogans, writes Eleanor Clift for US website Politics Daily.com. She says: "Obama has so far failed to come up with a memorable slogan that could rally voters to come out and support Democrats this November (for the USmid-term elections) like they did in '08.

He seems to have a reflexive disdain for the packaging that has become such an important part of politics, almost as though he's above it. If he's to persuade voters, he's got to do a better job of connecting with their emotions. It's not enough to outline rational responses to difficult problems when the other side is waiting to pounce."

Barack Obama's first year: "Yes we can" or "no he didn't"? writes David Ginter for US website Global Shift.org. Ginter says: "What we have experienced over the last year is not real change. A majority of the things that were hated under the Bush Administration have been continued and in some cases expanded under Obama, with new deviations from a just government and the Constitution thrown into the mix. The answer to the problems of Obama and the vast majority of his presidential predecessors lie in recognising the problem."

Ginter adds: "Instead of surrendering our rights due to overblown claims of terrorism, relinquishing control of our lives to government intervention. Once your power as an individual has been eroded, group and individual dependence upon government is likely to follow (as in the example of college tuition) which provides the opportunity for the ruling classes to exploit those of us that don’t have a team of lobbyists on staff.

To stop presidents from overstepping bounds, waging unconstitutional wars, denying due process to suspects, violations of the Fourth Amendment and spending the nation into a Zimbabwean style bankruptcy requires a radical change in our thinking. Barack Obama’s campaign slogan was “Change We Can Believe In”.

That change in the executive branch doesn’t seem to be something we can count on, so maybe the change necessary is with us. Such a change in thinking isn’t easy, especially in a country this large, but that doesn’t mean it’s impossible…nor that we should anticipate failure in our cause. Optimism is essential to achievement and it is also the foundation of courage and true progress.

Thoughts on left criticism of Obama writes John Case for US website Political Affairs.net. Case says:"The Left press and blogosphere is rife with analyses on the mistakes of the Obama administration that allegedly 'caused' the Republican resurgence in the mid-term elections.

Chiefly Obama's stimulus effort is scored as half-hearted, less than half the amount needed using the most precise Keynesian calculations. And from the perspective of Hyman Minsky's Post-Keynesian followers, the absence of a strong employer of last resort strategy gravely threatens a country's ability to recover stability or sustainable growth from the chaos of a 'government-constrained great depression' (the more accurate term for this crisis than 'the great recession')."

In it together: UK mega rich 'are recession-proof'