Congratulations to American politician Barack Obama for pulling off a stunning victory in the South Carolina primary to find the Democratic Party nominee for US President. He beat his nearest rival Hillary Clinton 2:1. Editors at The-Latest had earlier taken the unprescedented step of breaking with our independent political stance and backing the young Illinois senator like Caroline Kennedy, daughter of the assassinated President John F. Kennedy, who wrote in the New York Times that Obama's appeal reminded her of her father.

More important for The-Latest than Obama becoming the first Black US President are his progressive policies on key issues like the withdrawal of American troops from Iraq, wealth redistribution from rich to poor, health and the environment. Here we reproduce his personally-written profile for you to get a true picture of the man behind the media hype. But first, take a look at the statistics in the box below which reveal Obama's broad appeal which has won the support of the Kennedy dynasty and a host of other bit hitters, including Oprah Winfrey. 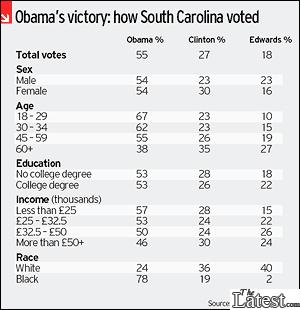 'I Will Uncover Truth About Princess Diana's Death'

World wants Obama as US president

2 Responses to "OBAMA FOR PRESIDENT"

<p><strong><u>Chris Gaynor</u></strong></p> Well, it seems like I have a lot in common with old Obama. a) I am a fan of the jazz legends Miles Davis, John Coltrane. b) The Godfather is one of the greatest films of all time. Aside from those will the lack of experience be his downfall in the Presidential race. He is a bit like a David Cameron - only time will tell though whether he will deliver. I agree with him on the withdrawal of US troops, but what is his policy on the War on Terror? And how does he intend on redistributing the wealth?

<p>I have been following the US campaign very closely, and it has to be said, Obama is the most passionate, believable and inspiring of all the potential presidential candidates out there in both parties.&nbsp; </p><p>I will reserve my judgement over him though until the list of his campaign donors will be made available to the press (something he promised to do two weeks ago now...).</p><p>In my opinion the best way to assess the true agenda of a candidate in the US electoral system is to look at who pays his/her bills.</p><p>Although Obama has managed to do a lot more with less money than Clinton, and despite the fact that he has raised a new record for small donations from the general public, he has too recieved big sums of money from big people.</p><p>Who these big donors are still remains to be seen, and I&#39;m hoping (for his sake) that his integrity and public figure will not be damaged by the presence of less than reputable names in the list.</p><p>That&#39;s not what he needs, that&#39;s not what we want.&nbsp; </p><p><span style="white-space: pre" class="Apple-style-span">P.S. he&#39;s actually a pretty funny guy too</span></p><p><span style="white-space: pre" class="Apple-style-span">http://www.youtube.com/watch?v=rOWlpvOPKXc</span></p><p><br />&nbsp; </p>