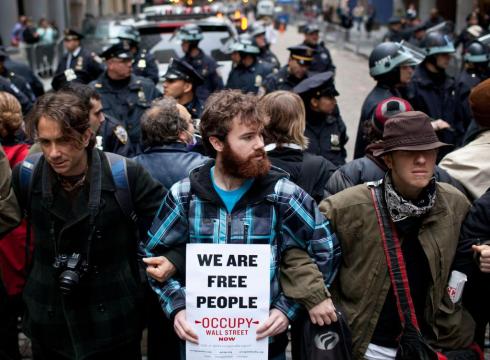 Much like President Obama, the Occupy movement is alive and well and entering its second term, thank you very much.

It's no longer about squatting in public parks, getting on the news, or - in some cases - getting arrested.

No, instead this decentralised, bottom-up, anti-Wall Street effort is taking aim at your medical, student and other loans: it aims to relieve your debt.

Just as Obama appears to have left the lofty rhetoric of "being the change" behind him as he confronts the more practical realities of working a financial plan through an intransigent Congress, the occupiers have given up on winning media mindshare or public support and have turned instead to direct action that helps real people. In its Act 2, Occupy is just occupying the space where it's needed.

Remember, Occupy does not have leaders, an administration or some central office. It's not a single body with a mission control that makes particular decisions. It began as a one-day demonstration in New York, "Occupy Wall Street," spawned by an announcement from the anti-corporate Adbusters magazine, and then mushroomed into similar encampments around the United States and in other parts of the world.

Although police eventually shut down these demonstrations, the social and internet infrastructure of the movement remained intact. People met one another over the course of the demonstrations, forged relationships online and continued working in their own ways.

Different members in different places have chosen to concern themselves with particular problems. Those that resonate with others in the loose collective end up getting support from the various websites and Facebook pages already associated with the Occupy movement. While there is no "official" Occupy movement, when an effort gains support from enough of the trusted Occupy networks, it can be considered a de facto Occupy action.

Most recently, the movement came to the rescue of hurricane victims with Occupy Sandy - a bottom-up, people-driven recovery effort that rivalled FEMA for its ability to bring aid to the people who needed it. The Occupy brand credibility, so to speak, as well as its existing networking infrastructure gave activists a great head start in connecting donors, organisers and providers to victims in the worst-hit areas.

Now, a growing contingent within the greater movement is refocusing on Occupy's original victims, the hundreds of thousands of people burdened with all sorts of debt. Many of the debtors owe many times the original amounts they charged up on their credit cards, medical bills or student loans.

Such debt is bought and sold on a debt market for pennies on the dollar by debt collection agencies and others capable of pressuring the debtors most effectively. 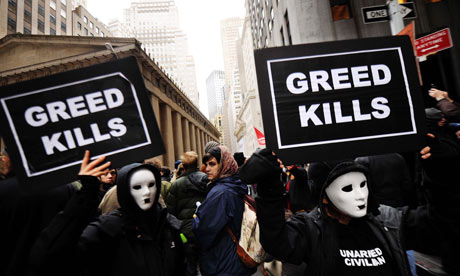 The reason debt is sold for such a small fraction of its acute value is that most collectors will not be able to recoup the money. They might buy $10,000 of credit card debt  from a bank or reseller, but most likely only be able to collect a tiny portion of it from the debtors, who either go bankrupt or simply broke.

In the belief that much of this debt is comprised of unjustified fees, inappropriate credit products or even outright fraud, an offshoot of Occupy called Strike Debt is working to erase it all...by purchasing it, and then forgiving it. Yes, seems it's that easy: buy debt for a tiny fraction of its face value in the same way that credit agencies buy debt. But then, instead of attempting to collect that money, simply erase it. Families struggling to pay for the compound interest on their 1990s medical bills, for example, simply find out that it's been relieved.

The whole debt-rolling operation, known as Rolling Jubilee, begins on November 15, with a variety show and telethon in New York City entitled The People's Bailout. Occupy-friendly celebrities from comedian Janeane Garofalo and Daily Show writer Lizz Winstead to music legends such as Sonic Youth's Lee Ranaldo and Fugazi's Guy Picciotto will perform for a live and - of course - streaming audience while the website accepts donations.

According to their estimates, every $25 will abolish an estimated $500 worth of debt. According to David Rees, one of the founders of Strike Debt and a leading voice in the Rolling Jubillee, "As a test run, we spent $500, which bought $14,000 of distressed debt. We then erased that debt."

Of course, in a perfect world, debtors would have the opportunity to erase their own debt at this rate. Or, at the very least, on hearing that their debt has been relieved, the rescued debtors would want to pay back the movement so that more debt could be relieved. Currently, legal restrictions and privacy policies prevent this sort of traction from developing. But if you're in a tight debt situation and learn that it has been mysteriously and anonymously forgiven, you might want to consider doing the same for someone else by contributing.

I understand why people might object to this scheme and can already envision the comments forming below this piece as I write. Isn't this moral hazard? Didn't those people get in their own debt? Why should we bail out people who have gotten into trouble like this?

The best answer, of course, is that we already bailed out the banks and creditors - with tax money. Why not bail out the actual people? And the Occupiers are not focusing on home loans taken out by aggressive real estate speculators, but the personal debt that has already been well documented to be ripe for abuse and fraud by lending institutions and their agents.

The easier answer is that if you don't like this idea, simply do not take part. If you find your debt occupied and relieved, you can surely find banks and credit agencies willing to accept your payments.

More significant, at least from my perspective, is how actions such as Occupy Sandy and Strike Debt reflect a movement coming of age. True to form, Occupy is making no demands of government, of banks or of anyone else. The occupiers did not involve themselves in the recent elections - as if electoral politics were just too many steps removed from getting anything done.

Instead, they simply occupy the space around those in the greatest need and fill in for what's missing.

*Douglas Rushkoff writes a regular column for CNN.com. He is a media theorist and the author of Program or Be Programmed: Ten Commands for a Digital Age and Life Inc: How Corporatism Conquered the World, and How We Can Take It Back.