According to Zimbabwe's pro-government Herald newspaper today President Robert Mugabe has failed to get more than 50 per cent of the votes in his bid to be re-elected for the sixth time. This means he must either step down or face a run-off with his arch opponent Morgan Tsvangirai, who is supported by the West.

Also, the parliamentary elections have gone badly for Mugabe's ruling Zanu-PF party which is headed for a tie with Tsvangirai's Movement for Democratic Change (MDC) in the House of Assembly.

The Zimbabwe Electoral Commission had by 10pm last night released results of 160 House of Assembly constituencies with Zanu-PF and the MDC continuing in a neck-and-neck contest. Indications last night were that the two parties were likely to win between 96 and 99 House of Assembly seats each.

Analysts were projecting that this pattern of results was pointing to a run-off in the presidential poll as neither of the two presidential candidates was likely to achieve the 51 percent margin.

The Constitution states that if a winner in a presidential election fails to garner 51 percent of the total vote, a second round will be called within 21 days between the winner and the candidate with the second highest number of votes. 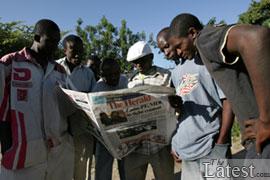 South African Archbishop Desmond Tutu told the BBC the fact that results had not been announced was very significant.

"Even the dumbest of us would say that results would not have been held back... had it not been the fact that Mr Mugabe has not won," said the Nobel Peace Prize winner.

Tutu added: "Had the Zanu-PF won these elections we would have heard them crowing a long time ago."

Earlier the Zimbabwe Election Support Network, a coalition of civil society organisations, said its random sample of poll stations indicated Mr Tsvangirai had won just over 49 per cent of the vote and Mr Mugabe 42 per cent.

Mugabe has not been seen in public since voting began on Saturday, sparking speculation about his whereabouts.