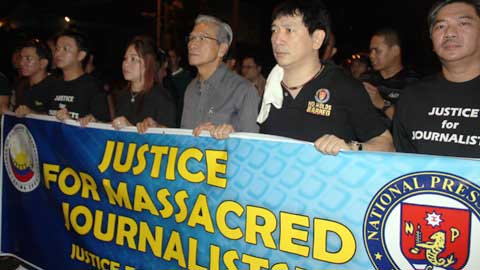 At least 59 journalists have been killed because of their job in the first six months of this year, according to the Switzerland-based Press Emblem Campaign.

The non-governmental organisation issued a statement this week, announcing that this year's journalist death toll stood at 59 up from 53 for the same period in 2009.

According to the Geneva-based organisation, journalists are more in harm's way in Mexico where they are hunted by organised crime and suffer the highest death toll.

Earlier, Mexico's National Human Rights Commission urged authorities to investigate the killing of a reporter in the Pacific coast state of Guerrero, the fourth slaying of a Mexican journalist this year.

The rights commission said at least 61 journalists have been killed in Mexico since 2000.

Meanwhile, Honduras, Pakistan, Nigeria and the Philippines are also reported as other most dangerous countries for the media.

Apart from the cited organised crime, the report also mentions tribal tensions and political disputes as other reasons for the killing of journalists.

Blogging is the new TV