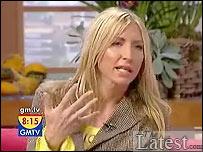 Music superstar Paul McCartney's estranged wife Heather Mills has compared her 'hounding by the press' to the same treatment some people claim drove Princess Diana to her death a decade ago.

Mills, who is involved in a messy and head-line grabbing divorce from ex-Beatle McCartney, has accused the media of "pushing her to the edge".

In an emotional interview on breakfast TV station GMTV, she also accused "a certain corner" of fuelling negative coverage about her in the press. She added she had received death threats and been "close to suicide".

Mills called on the public to stop buying newspapers that trade on stories like hers. She said: "I've had worse press than a paedophile or a murderer and I've done nothing but charity for the 20 years. They've called me a whore, a gold digger, a fantasist, a liar," she added, complaining that she had endured "eighteen months of abuse [and] 4,400 abusive articles".

In a further interview with BBC Radio 5 Live, Mills said of the media: "They had me on the brink of suicide, because I was contemplating that if I killed myself then my daughter will be safe, because when she's with me, maybe she's not going to be safe."

Mills appeared on GMTV with a large file of press clippings, calling for European law to make the press "just and fair".

She denied suggestions that she had used media coverage to her own advantage, saying: "I haven't used the press for anything but my charity. Mills' divorce from Sir Paul McCartney has become front page news.

"I am the one that is abused daily. I have protected Paul [McCartney] for this long and I am trying to protect him but I am being pushed to the edge. What did the paparazzi do to Diana? They chased her and they killed her," said Mills.

When asked about her ongoing divorce case with Sir Paul, Mills said she has been "offered nothing" and faced legal fees amounting to  £1.5m, but said she was unable to discuss it for legal reasons.

"I'm gagged at the moment because I'm not allowed to say a word while the media are fed this spin by a certain corner," she said.

She said reports that she wanted to obtain a clause in the divorce settlement to sell her story were "rubbish".

"I can sell my story right now. I'm trying to protect Paul and our daughter. I am trying, and I'm being pushed to the edge."

A GMTV spokeswoman said its interview with Mills, which lasted for 20 minutes, was allowed to run on because "it is a news programme and things can change. If it is a good guest then we run with the story."

2 Responses to "'Paparazzi killed Diana, now they're killing me'"

<strong>Ben at<a href="http://www.londonist.com" title="londonist.com"> www.londonist.com <br /></a></strong><br />As far as we are concerned, McCartney should have retired years ago, just before he started Wings and released Mull of Kintyre. Sadly he didn&#39;t and continues to release albums to this day, such as this year&#39;s ridiculously mediocre left-handed mandolin tinged effort that was sold at Starbucks. Rock and Roll.<br /><br />I suppose we don&#39;t really mind him releasing new solo albums, what really gets our goat is his Beatles cover band show that he schleps around the world (sometimes bringing a big bag fireworks if he gets called up to a major concert like Live 8 or the Queen&#39;s Jubilee, hang on, what do we mean &#39;if&#39;?). No one appreciates having to witness the embarrassing spectacle of him wailing through &#39;Hey Jude&#39; (with extended excruciating singalong nananas - &quot;now the ladies on their own!&quot;) or singing &#39;Get Back&#39; in that cringeworthy faux 1950s American rock &#39;n&#39; roll voice. We&#39;d rather drink a pint of Gaviscon.<br /><br />However, 3000 of you shelled out to go and see him at the BBC&#39;s electric proms at Camden Roundhouse. We caught a bit on BBC2 and vomited all over our copy of &#39;Revolver&#39; (although that might have been all that Gaviscon).<br /><br />What really annoys us is that the BBC News website deign to report on the event as &#39;news&#39; under the headline <a href="http://news.bbc.co.uk/1/hi/entertainment/7061542.stm">&#39;Sir Paul&#39;s family attend Prom gig&#39;</a> - bloody hell, newsflash. <p><em><br /></em></p><a name="more"></a>

<p><strong><u>Chris Gaynor</u></strong></p> Two Questions here: A) How much is Mills getting for her rantings and ravings? B)Why use the media on the one hand and then scathe about how it destroys public figures and their lives? I have no sympathy for public figures who use the media to their own ends when they want fame and then scathe about the media when they have got to where they want. That is the way the cookie crumbles if you are in the limelight you are 'fair game'