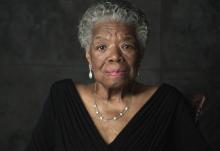 “What a woman!” “A very special lady, the original.” Since the hard-to-believe news of the death of Maya Angelou, people who did not know her personally have been sharing thoughts with me as a small measure of the connection she made with so many, through her words as well as her presence.

The experiences she survived were painful enough to have engendered permanent bitterness or self-pity in most others, yet Maya overwhelmingly exuded positivity and a celebration of life.  Like anyone else, she sorrowed over the loss of friends, the disappointment of love affairs.

But there was a journey to continue and the spirit with which she undertook it was apparent even in the titles of her works. Typical of her capacity for optimism was that when she autographed a book, the inscription very often contained the exclamation “Joy!”

She took much strength from her grandmother, who was a major role model in her life, and her mother, who instilled in her a self-confidence in the face of adversity, and from a stalwart band of sister-friends. In turn, Maya was an inspiration to Black women everywhere.

That she graciously allowed her seminal poem “And still I Rise” to be echoed in the title of Doreen Lawrence’s autobiography was typical. Men, too, related strongly to her. As writer/activist Marc Wadsworth, editor of The-Latest.Com, says: “Maya’s autobiographies and poems inspired me as a young Black man looking for an incisive answer to questions of racism, Black politics and culture and the role of Black women in feminism. Along with Langston Hughes, James Baldwin, Angela Davis and Sam Greenlee, she was my greatest influence among the great Black American writers of her generation."

He added: "Not many of her contemporaries had Maya Angelou's internationalist vision, her abiding humanity and willingness to extend her support for the struggle against racism beyond America.”

Standing six feet tall, she seemed invincible in her younger years.  But in fact she too had her insecurities, as I found when I interviewed her 20 years ago, when she still had memoirs to write, dealing with the tragedy of the tragedy of the deaths of Martin Luther King Jr and Malcolm X, and about her relationship with mother. “The way I deal with any pain is to admit it - let it come. It is out of death that life comes.”

As well as being a writer, she was a teacher, an activist. A meal with her meant wisdom imparted along with the wine, a tear as well as a laugh. And always a song, that could as easily be a version of Bessie Smith’s “Gimme A Pigfoot (and a gallon of gin, Baby, ‘cos I'm in my sin)” as that paean to loneliness “Sometimes I feel like a motherless child”.

Even as I write this, I get a Skype call from a friend in Washington, devastated by the news, just wanting to talk about Maya.  “Irreplaceable,” Andrea says simply.

* Margaret Busby is an editor and writer and trustee of the Citizen Journalism Educational Trust who was a friend of Maya Angelou.