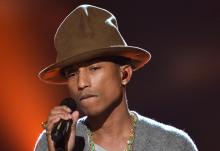 He was the guy involved in the UK's two top selling tracks of 2013, Blurred Lines and Get Lucky. These days, Pharrell Williams also known simply as Pharrell, probably spends a lot of his interviews being told how great he is. But this one with Channel 4 News' Krishnan Guru-Murthy was different.

The reporter quizzes the 41-year-old multi-Grammy award winning singer-song writer and record producer, on the controversy surrounding last year's collaboration with Robin Thicke. Critics of the song said the lyrics and video trivialised sexual consent and promoted a rape culture. The song was also banned from being played in several university campuses around the UK.

Guru-Murthy challenged Pharrell on the lyrics. Pharrell began firing questions back at the reporter, including whether the news man ever had "naughty thoughts" about his partner.

In a blog post Guru-Murthy describes having an "animated" conversation with Pharrell after the cameras had stopped recording, where Pharrell told him about why he was unhappy with some of the interview.

* This story first appeared on NME.com.