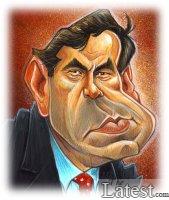 Brown's missive on the day of polls for the European Parliament and county councils which could sink his premiership comes at a time when the media, political pundits and colleagues continue to feverishly speculate on when the beleaguered leader of the ruling Labour party will call a general election.

Seemingly riding the storm caused by key Cabinet figures like Home Secretary Jacqui Smith and Communities Secretary Hazel Blears who have made calculated announcements just before today's crucial Local and European Parliament elections that they are jumping off what now looks like the sinking "Brown Titanic", yesterday evening the PM made a last gasp appeal to party members who he describes as the "lifeblood" of Labour, to engage in last minute doorstep canvassing to win over voters.

Yet one disgruntled Labour party member who contacted The-Latest and does not wish to be named, said she was astonished to receive the communication from Brown as well as begging emails for funds a few days ago from Ray Collins, General Secretary of the Labour Party and his deputy Alicia Kennedy. In one email (dated June 2) Collins said: "Earlier today, Alicia asked you to help print our urgent leaflets to stop the BNP (British National Party). We have now confirmed to start printing at midnight tonight, but we haven't decided how many  — that is up to you. Donating  £15 now lets us print an extra 1,000 leaflets.

I want to thank all the Labour Party members, from all over the country, who have already donated whatever they could afford. We now only have a few hours left, so I am asking you to please make a donation this evening."

The Labour Party activist, who has Deputy Leader of the Labour Party Harriet Harman as her constituency MP, said these unashamed requests for money from cash-strapped members were a "cheek" in the wake of the indulgent excesses of Labour MPs as exposed in the last few weeks by the Conservatives-supporting Telegraph newspaper. She also revealed that a number of fellow local Party members had been harangued by residents while campaigning because of the expenses row and   were now "too afraid" to deliver Labour election leaflets.

While Britain's mainly right-wing, anti-Labour press and the left of centre Guardian have called for Brown to go and obssess over who his successor should be, socialist MPs and news media take a different view. They say that whether a Harman, health secretary Alan Johnson or anyone else in the Cabinet takes over is irrelevant because they are all to blame for the disastrous "new Labour" policies of war, Thatcherite privatisation and the failure to tackle City of London fatcats and greedy MPs.

The Daily Mirror, Labour's only big-selling tabloid supporter, says that if Brown is to "cling on" he must "mould a new political agenda, seize his party - and the country - and remake his Prime Ministership" right away.

While the influential labour movement paper the Morning Star says trade union leaders, who fund Labour, should end their silence and demand changes in policy to make the party socialist again. Its view is that replacing Brown with a member of his Cabinet, as demanded by Blairite MPs and the right-wing press, would just be a case of swapping "Tweedledee for Tweedledum".

This is Gordon Brown's email to party members:

Yesterday Ray Collins and Alicia Kennedy emailed you to ask for your help in paying for our final leaflets of this election campaign.

I have been humbled by your response. You raised more than we've ever raised online in 1 day before.

Also humbling is the fact that hundreds of members from across the country have used the virtual phone bank during this campaign to make over 20,000 phone calls to target voters.

And the thousands of you who have turned out week in week out to deliver leaflets and knock on doors for Labour.

And I know that you have done all of this in spite of the fact that you feel angered and frustrated about the events of the last few weeks.

As I've spoken to members at campaign events across the country you've told me why  — because you know that despite all of the frustration s we still need to be out there making the case for Labour because on every choice, our Party's values put us on the right side of the argument while the Tories find themselves hopelessly wrong.

On the economy our commitment to investing to grow our way out of the recession  — by helping people keep and find jobs - is opposed by a Conservative Party that believes that cuts and leaving people to fend for themselves is the answer.

On public services, while we see the need to invest in lower NHS waiting times, in extra nursery places and in guaranteeing places in education, training or apprenticeships, the Conservatives see only budgets to be cut.

And on crime, housing and Europe, our commitment to be tough, to help those in need and to engage to get the best deal for Britain are met with the same old Tory responses.

I don't think there has ever been a time when the choice between our Party and our opponents has been clearer or more important.

So as you continue to make this choice clear to voters on the doorstep tomorrow and beyond please know that I am so grateful for all that our members do for our Party  — you are the lifeblood of our Party and yet again you have not let us down.