Politician who is not 'martyr for freedom'

Former leading British Conservative MP David Davis has been at the centre of a media frenzy following his resignation over the issue of the government's controversial 42-day detention without charge policy. 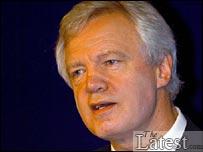 The ex-shadow home secretary has triggered a by-election in his Haltemprice and Howden constituency in Yorkshire and says he is to stand as an independent and will fight for  'civil liberties' and hopes to  'encourage a great debate'.

What utter rubbish. The shock move is neither a publicity stunt nor an act of high principle. The fact is Mr Davis is an ambitious man; he has tried and failed to gain the Tory leadership and has held a number of shadow cabinet offices. It has obviously been made abundantly clear that the former Special Forces man is no longer in David Cameron's plans for any possible cabinet position after the next general election, most probably happen in 2010, which the boys in blue are widely tipped to win.

It was merely a desperate attempt, due to his notoriety to the British public, to derail the Tory express that has gathered speed over the last six months, due to a number of high-profile blunders by leading members of the government and in the wake of the ruling Labour Party's embarrassing defeat in the Crewe by-election in May.

With the motley collection of musicians and politicians from other parties that Davis has put together one wonders whether or not he's trying to become the pied piper of British politics. So far he's managed to attract acclaimed violinist Nigel Kennedy and British army colonel Tim Collins. Veteran Labour MP Tony Benn is said to have pledged to speak in support in a by-election rally if Labour fail to field a candidate against Davis. Left-wing singer Billy Bragg is also said to have been approached by the Davis campaign team for a possible collaboration.

It appears the British public wants a change and no amount of political smoke-screening will alter that. It is unsurprising therefore that Cameron has started to think about being Prime Minister, the steps he needs to take to fulfill his dream and what he is going to do when gets there. Upon meeting the man last Friday while on the campaign trail in Henley-on-Thames, in South Oxfordshire, it is clear he wants to bring in fresh faces with new ideas and a new way of thinking  — David Davis clearly does not represent any of those things.

He got out before he was booted out. The Henley by-election itself is quite interesting. Tory candidate John Howell, is a local man who has served on the district council and has close links within the town and I don't think there is any doubt that he will replace the new mayor of London Boris Johnson as MP, although I do feel the party's majority will be cut.

In the words of a friend and colleague of mine  "you can put a blue rosette on a goat and it would be elected in Henley." The fact that Cameron is here claiming  "we are definitely taking this seriously, there is no such thing as a safe seat," is also a faÃ§ade. I anticipate in two years time Howell will be asked to step aside and a new face, possibly another mate from Eton, will be put in his place and parachuted up to the cabinet. I've got your number pal. Interestingly though Labour's Henley-man, Richard McKenzie, is currently facing the serious prospect of losing his deposit to stand for the seat.

I've seen Lib Dem leader Nick Clegg, then Cameron but all I'm told is  'somebody senior' from the Labour party will be coming down next week  — I didn't even know the Labour candidate's name until yesterday. That really does put it all in context doesn't it. So can I really blame Davis for taking the stand he has done?

Sure I agree with him on the subject, but where he resides is such a stronghold there is no real chance of him losing, thus limiting any political impact. Sure he will make a few headlines, but the affect won't be of the kind to undermine Cameron's push for power, because let's face it whatever the Tories do within the next two years nothing will halt the downward spiral currently experienced by prime minister Gordon Brown and Labour.

I just feel sorry for Davis because, despite being a diligent politician who stands up for what he believes in, he is soon to be cast on the political compost heap, having been known as the Tories nearly-man. But that is the price of progress and David Cameron's seemingly relentless pursuit of a re-branded Conservative party.

It seems I am the only person who is happy to see that the Shell drivers are on strike. Firstly, none of the garages near where I live are supplied by shell and secondly, and most importantly, my journey time to work in the morning has been halved due to the fact that I no longer have to sit behind lorry drivers who persist in taking up two lanes or driving about as fast as an asthmatic ant with some heavy shopping.

It's not so great being young...

1 Response to "Politician who is not 'martyr for freedom'"

<p><strong><u>Chris Gaynor</u></strong></p><p>When the news first broke, I thought.....Why?</p><p>But now, having slept on it. Davis has been clever. Not only has he commanded more respect from Labour poltiicians over his stance, but, he has also revealed just exactly how many are disaffected by Brown&#39;s top down government and erosion of fundamental freedoms.</p><p>We can analyse all day why he did it. But, the fact is, he did it to expose the Labour Party&#39;s in-fighting and rebellion.</p><p>I admire Davis for his stance. At least he has guts to do what he did. No politician I think has that guts nowadays and it just shows you how far the Tories have come.</p><p>Ofcourse, there are those who will say he was doing it to raise his profile and maybe disrupt Cameron&#39;s honeymoon in the polls.</p><p>I am a cynic, but I can&#39;t help feeling that you can be over cynical.</p><p>It will be interesting if Davis is re-elected to see how Cameron handles Davis, and whether he offers him a job in the shadow cabinet.</p>