Two of The-Latest.com opinion polls have produced revealing results about the views of our readers on hot British and global topics.

UK Conservative Prime Minister David Cameron and his government have tried to rally the public around its policy of “economic austerity”. In attempting to inculcate a sense of nationhood and collective responsibility in all of us for bruising spending cuts the Tories have coined the regimentally repeated phrase “We’re all in this together”  - have they convinced our members?

Ebola, the deadly virus, has threatened the world’s health since its most recent outbreak last year.

Largely affecting countries in Africa, The World Health Organisation estimates that at the end of May 2015  the total number of infection cases reached 27,135 and the number of people said to have died is 11,132. Have the press done a good job in reporting the Ebola crisis? We polled our readers for their views.

First a note about UK opinion surveys. They received a well-deserved kicking in the media in the wake of their dreadfully misleading and inaccurate predictions of the country’s May 7 general election results.

It was the often criticised exit poll, conducted by market research firms Ipsos MORI and Gfk NOP in which 22,0000 responded that won it on the night for the survey fraternity. The exit poll, which asks people how they voted immediately after they have left the polling stations, had the Tories back in government with 316 seats. The party won 331. Scoffing politicians on the losing end of the forecasts were forced to eat their words but not their promised hat in the case of former Liberal Democrat party leader Paddy Ashdown. 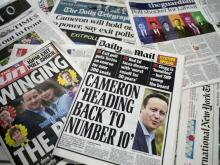 The rest is general election history. The Labour Party failed to win so the Conservatives were victorious, the Scottish National Party did very well and is now entrenched in sizeable numbers at Westminster. The Liberal Democrats were decimated and a very minor party called UKIP achieved a respectable share of the votes.

The-Latest’s grassroots surveys are open to all of our members who are a diverse, cross section of independently minded people. Our polls are free from bias. We believe in the integrity of our reader’s responses and are distinct from the huge multimillion-pound operations of pollsters like YouGov who have at the heart of their organisation direct links to the UK political establishment.

No, a majority of our readers have not been fooled by Prime Minister David Cameron’s “We’re all in this together” tool of mass deception. Asked if they agreed with Cameron’s balm of words and 63 percent disagreed and felt “rich Tories like Cameron are not affected by the economic downturn”. A smaller amount, 14 percent thought “we’ve all got to make sacrifices to improve the economy” and 24 percent of respondents did not know how they felt on the issue.

Tory cabinet ministers who at the last count (2012 by the Wealth - X consultancy) had a whopping combined wealth of £48.5 million would know absolutely nothing of the hardship experienced for instance, by the hundreds of thousands of Brits forced to use food banks to feed themselves during the last five years of Conservative ideologically driven cuts to welfare and public services. This glaring hypocrisy has been challenged by many and might account for why the Tory mantra “We’re all in this together” is on the wane with ministers and is being replaced by a supposed concern for “hardworking” people.

Media coverage of the Ebola contagion has been widely slated for “panic” headlines. We polled our readers to find out if they thought media output about the disease was balanced and 69 percent agreed it was “hysterical and scaremongering”. A further 17 percent felt that coverage had been “fair and factual” while 15 percent did not know. Some sections of the media need to hold their hands up to irresponsibly increasing public fear about Ebola with stories which grossly exaggerated the risk to people in the UK.

Our current poll is on Britain’s membership of the EU and the proposed 2017 referendum on this divisive subject. Join up, cast your vote and be a part of the conversation on The-Latest.