Prince Harry story was a plant not a scoop 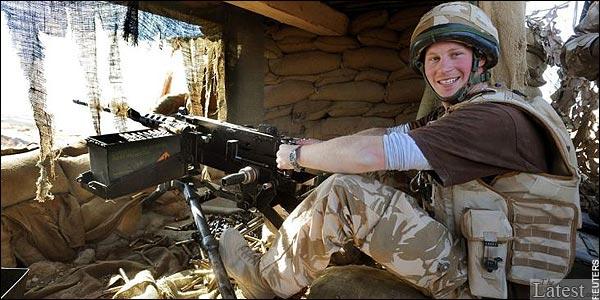 Hail Prince Harry the hero. Or, is he? The third in line to the British throne was 'sensationally' outed as a warrior in Afghanistan by US citizen journalist Matt Drudge, after a UK news media 'blackout'. Now, was this a deviously-executed plant of a story by the British Establishment or a genuine scoop, asks Marc Wadsworth.

Methinks the former and we should be careful as citizen journalists not to be used in this way. Matt, of the infamous right-wing online Drudge Report, made a name for himself exposing President Bill Clinton's sexual escapades with White House intern Monica Lewinsky. Last month he was back in the headlines after publishing a photo of American presidential hopeful Barack Obama dressed in white robes and a turban on a visit, two years ago, to Kenya.

This mischief, stirring up passions in anti-Muslim America, was claimed to have come from Obama's rival for the Democratic nomination, Hillary Clinton's camp. Back to Prince Harry, the Queen's 23-year-old nephew, who is better known for wearing a Nazi uniform as fancy dress and being drunk at night clubs and lashing out at paparazzi than commanding soldiers as an officer in the British army. So, the story goes, he was secretly sent to Afghanistan, at his own insistence, just before Christmas.

And, now his cover blown, Harry has been 'extracted' by military chiefs, in other words, swiftly flown back to Britain to protect his safety and that of his men who would have become 'targets of the Taleban'. But, surely in war-torn Helmand Province, they already were? Read between the lines of the gullible, fawning news media reports and you'll discover Harry was no ordinary officer in a war zone. He was protected round the clock by a dedicated group of SAS-trained Gurkha's, who are among the most fearless fighters in the world.

And a US helicopter was permanently on standby to whisk him away from any real danger - which it now has. Could this news management, of which the British media should be ashamed, have anything to do with the current inquest into the death of Harry's mother, Princess Diana? Claims by her boyfriend, Dodi's grieving father, Mohammed Al Fayed, that she was murdered by the royals have proved very embarrassing for them.

The young prince's illustrious ancestor, Henry V, known ironically as King Harry, would have taken a dim view of these shenanigans. On the eve of the famed victory of the English army over the French at Agincourt almost six hundred years ago, he said, according to William Shakespeare: 'That he which hath no stomach to this fight, let him depart; his passport shall be made and crowns (money) for convoy put into his purse: We would not die in that man's company that fears his fellowship to die with us.'

Don't fall for the news media-hyped myth-making about Harry or any of the other mega rich, pampered, unelected royal rogues.

Campaign of hate, sir? Here, have the Daily Mail

Politician who is not 'martyr for freedom'

Italy's right-wing could be defeated by shattered unity