Senior politicians and the leader of a Muslim youth organisation have today condemned soldier Prince Harry for a video diary in which he describes an Asian member of his platoon as "our little Paki friend".

The prince, who is third in line to the throne, made the comments in footage shot while training as an officer at Britain's Sandhurst military academy in 2006, a year after being forced to make a public apology for wearing a Nazi swastika at a fancy dress party. Last night, a royal spokesperson issued a public apology for the latest incident, saying: "Prince Harry fully understands how offensive this term can be, and is extremely sorry for any offence his words might cause." 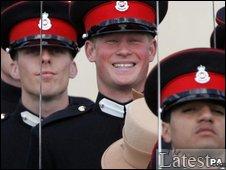 "However, on this occasion three years ago, Prince Harry used the term (about Ahmed Raza Khan) without any malice and as a nickname about a highly popular member of his platoon. There is no question that Prince Harry was in any way seeking to insult his friend."

The Conservative Party leader, David Cameron, became the first leading politician to comment on the matter when he told the BBC: "It is obviously a completely unacceptable thing to say and it is right that he has apologised.

But Cameron went on to say that he did not believe the prince should face further punishment: "He has made an apology. I think it is important he is clear about that and I think that is enough."

Mohammed Shafiq, director of Muslim youth organisation the Ramadan Foundation, said the comments would be offensive to many Asians.

"The use of this sort of racism has no justification and I am saddened by those that are advocating using this term is not racist," he said.

"Prince Harry, as a public figure, must ensure that he promotes equality and tolerance and this rant, whether today or three years ago, is sickening and he should be thoroughly ashamed of himself."

In the film, the 24-year-old prince calls an officer from the Pakistani army, who was on the course with him, "our little Paki friend", and when he sees another officer cadet wearing a camouflage veil, exclaims: "Fuck me, you look like a raghead."

*See The-Latest stories Prince Harry story was a plant not a scoop and Harry the hero, really?

1 Response to "This is Prince Harry's 'Paki' video"

<p><strong><u>Chris Gaynor</u></strong></p> It is pretty difficult nowadays to determine what is and what isn't offensive - and who finds what offensive... This has been caused by politically correct politicians who have made everything a taboo subject regarding what is and what isn't unacceptable. Politicians are quick to jump on this story though, and that includes right, centre and left. To be honest, having watched the footage, the comment is hardly offensive. Is this not another example of a mainstream newspaper trying to find a story out of nothing. Granted, the NAZI costume party wearing swastika was a 'scoop' but this hardly warrants exclusive material....