Tributes to trailblazing Jamaican Second World War veteran Sam King have been flooding in after his death in the UK aged 90.

The first Black mayor of Southwark, in south London, 33 years ago, King has been hailed as a "pioneer" in British politics.

He was a lifelong Labour Party and trade union member. Labour leader Jeremy Corbyn said: "What a legend, what a loss."

Labour MP Diane Abbott, the first Black woman to be elected to the House of Commons, said he was a "very dignified and very gentlemanly" person who helped break down barriers for Black people in politics.

She went on: "Someone like myself who was fortunate to become an MP stands on the shoulders of people like Sam King."

Sam was a star of The-latest's documentary Divided by race, united in war and peace. Consultant to the film Tony Warner, of Black History Walks, said: "Sam King's legacy is huge and he will be sorely missed. When he ran for Mayor in 1983 the [racist] National Front rang him and threatened to cut his throat and burn down his house. This was just two years after the New Cross Fire [in which 13 young Black people had been killed by a suspected fire bomb]."

Warner added: "Yet he persevered and became the borough's first Black Mayor and set a great example for Black politicians. It wasn't until 1987 that we got our first Black MPs, just to put his achievement into context. It was huge at the time. He fought housing discrimination by setting up 'partners' in North, South and East London and enabled Black people to buy numerous houses at a time when banks refused to loan them money."

Southwark local historian Stephen Bourne, an expert on Caribbean war veterans, said: "The role that Sam King played in the field of Black history is hard to overestimate. His achievements speak for themselves, but are all the more impressive for having been accomplished in the difficult times of post war Britain." 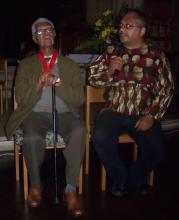 Producer director Marc Wadsworth, who also worked with King on its complementary film and photography schools project, said: "Sam's death is really heartbreaking news, coming just months after his fellow Jamaican war veteran Laurent Phillpotts passed away. It just shows how important it has been recording for posterity their amazing contribution to keeping Britain free from nazi domination. The Black volunteers have not been properly recognised by historians, politicians and the media and we've been trying to do something about changing that." 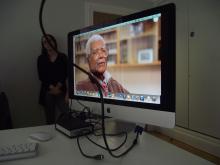 Wadsworth added: "Sam was wise, courteous and incredibly skilful working with students who loved him. He told them his fascinating wartime and post-war stories without any bitterness about the racism he and his comrades from the Caribbean and Africa faced. I remember, with a smile, him saying encouragingly to me each time we spoke, "You youngsters are doing a good job. Keep it up.'"

Since King's death, there has been misinformation in the media about him allegedly being a "founder" of the Notting Hill Carnival, something disputed by experts who have written about its history. 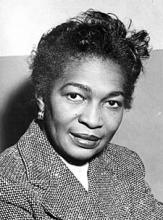 King makes no such claim in his autobiography Climbing up the rough side of the mountain. He modestly referred to his friendship with its acknowledged founder Claudia Jones, whom he helped with her Brixton-based The West Indian Gazette and Afro-Asian Caribbean News, the second Black post-war weekly newspaper after Colonial News.

In his book he said he was t 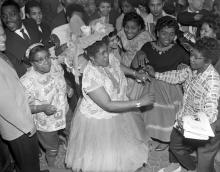 he paper's "circulation manager". Again, this is disputed, though no one doubts he helped Jones make the publication a success. 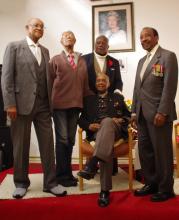 King had been unwell since January and passed away peacefully, surrounded by family and friends, on June 17.

Born on February 20 1926, Samuel Beaver King, the second of nine children, grew up at Priestman’s River, Portland, Jamaica, where he worked with his father on the family's banana farm. He described, in his book, why he was given his names: "Samuel because they [his family] had all prayed for a son, as Hannah in the Bible did, and Beaver because the beaver is a smart, hardworking animal." 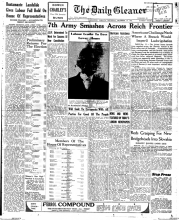 King did well at school before answering the call from the “Mother Country”, after spotting an advert in The Daily Gleaner appealing for volunteers. He passed a series of general knowledge, arithmetic and English tests set by the British before doing a month of intensive training in Kingston, after joining the Royal Airforce (RAF) in 1944, and then set sail for the UK.

When King landed at Greenock, on the Clyde, near Glasgow, in Scotland, in November that year he was shocked by the devastation German bombing had caused. He had left Jamaica, in temperatures of 75F (23C). The temperature in Scotland was 39F (4C). King said: "I thought I was going to die."

In Divided by race, united in war and Peace, he explained: “My mother said, ‘Sam the Mother Country is at war, go’. Let us get this straight, the Germans wanted to rule the world and if Hitler had won they would have put us [Black people] in ovens and lit the fire. We had to fight for our own salvation.”

Like many of the thousands of Caribbean RAF recruits, King was sent to Filey’s Camp, in North Yorkshire, for training. The men were then split up into groups for ground crew training. King was posted to the fighter station RAF Hawkinge, near Folkestone, where he served as a skilled aircraft fitter, before being stationed throughout Britain.

After the war he returned to Jamaica. But unemployment was widespread and Britain desperately needed help to rebuild after the destruction caused by the war. So King returned with almost 500 others from the Caribbean who had paid the £28.50 fare to be on the Empire Windrush. The ship famously docked at the Essex port of Tilbury Dock in June 1948. He remarked in his book: "The acute shortage of accommodation was the biggest problem facing immigrants who were arriving from the new Commonwealth countries."

He added, poignantly: "The host nation saw the influx as an imposition and became hostile." As publicity for the-latest's film noted: "Men who had been welcomed as heroes coming to help Britain in its hour of need during the war were, out of uniform, suddenly unwelcome."

King settled at Camberwell, south London, and was one of the first Jamaicans in London to buy a house. He found work as a postman, rose to a senior Royal Mail job, and became an active anti-racist campaigner in the community.

King was elected councillor in the south London borough of Southwark and by 1983 had become its first Black mayor.

In 1995, Sam King and Arthur Torrington set up the Windrush Foundation, the first charitable organisation dedicated to keeping alive the memories of the young men and women who were among the first wave of post war settlers in England. H

He campaigned with Torrington for a Windrush Day to commemorate the arrival of the ship in Britain, an occasion, they said, was as significant as the Mayflower arriving in America..

In 1998 he was awarded the Member of the British Empire medal by the Queen, for his community service. 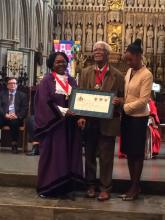 The people of Southwark voted in 2009 for him to receive the honour of a blue plaque at his former Warmington Road, Herne Hill, south London, home. Last month, Southwark council gave him the Freedom of the Borough.