Pundits knew former Labour justice minister Sadiq Khan was likely to become the first Muslim and politician of colour to rule London, despite the dog whistle Islamophobia of his desperate Tory rival.

But the shock success of Black candidate Marvin Rees in Bristol came from under the radar - yet Sunday newspaper coverage of it the following day was little to none. They preferred a perceived "attack" on Labour leader Jeremy Corbyn by Khan.

Rees, 44, gave up his job as a health service manager to run for mayor. A former BBC radio journalist, he is a smart, shaven-headed son of a Jamaican migrant who came to Britain as a 12-year-old, and a white, working class Bristolian retired nursery nurse. 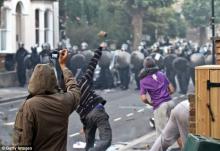 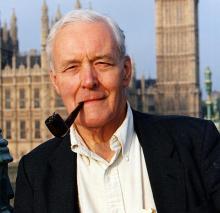 The city, in whose run down St Pauls African Caribbean neighbourhood he grew up poor, has a progressive political record as well as a shameful slave port past. Of its four MPs, three are Labour women. And icon of the British parliamentary left, Tony Benn, was once a Bristol MP.

In 1980, years of police harassment of Black people came to a head when officers raided St Pauls' Black and white cafe sparking an uprising that was the precusor to others that ravaged English inner cities the following year. 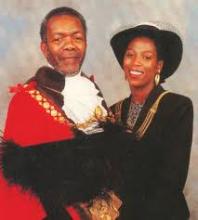 Now Bristol has a powerful boss who is Britain's first directly elected Black mayor. Respected Jamaican Labour councillor Jim Williams made history when he became the city's Lord Mayor in 1990, but his post was ceremonial rather than political.

Cllr Afzal Shah, a Pakistani Kashmiri, an enthusiastic Rees supporter who rallied Muslims to vote for him, said: “This is a great day for diversity in Britain: Sadiq in London and Marvin in Bristol. I'm very hopeful for the future.”

Rees said, in a speech at a rally when the far right and xenophobic English Defence League held a march in Bristol: “We are going to be a city that stands together and forges a future of hope, not a future of hate. And it's important we live the future and we are an example of the future we want Bristol to be.”

In an exclusive Voice interview, he told me: "I am the descendant of people who were enslaved in Jamaica. Now I'm the mayor of Bristol."

He went on: “I think there’s another piece of poetry in that, 50 years ago, Paul Stephenson led the Bristol bus boycott because Black and Asian people couldn’t get jobs on the buses.”

“And, within the lifetime of many people who lived in the city then, they’ve just elected a mixed race mayor who wouldn’t have got a job on the buses.”

One of the Black people to benefit was Jim Williams, who got a job on the buses after the colour bar had been defeated.

Staunch Rees backer, Stephenson turned 79 during the election campaign. At a birthday party I attended at his Bristol home with the two of them – a relaxed Rees wearing a Superman tee-shirt -  Stephenson said: “I’m so happy that this great city has turned its back on racial prejudice by electing Marvin. But he has a lot to do to make that gain irreversible.”

Rees commented: “I'm going to be mayor for all the people in Bristol. Someone who, unlike his predecessor, listens and attempts consensus rather than acts in an aloof, dictatorial way.”

That predecessor, wealthy architect George Ferguson, who cannily judged public mood by ditching the Liberal Democrats to successfully run as a Bristol First independent in 2012, this time had the disadvantage of being the sitting mayor. He upset voters during his four-year term by imposing a 20 mph speed limit, parking restrictions that harmed businesses, building just four new council homes in a year and spending millions of pounds on pet projects, including a singing tree.

Political rookie Rees stacked up a respectable 31,259 votes for Labour in the first contest – less than seven per cent shy of Ferguson's winning score when the post was first contested after a referendum to decide whether the people of Bristol wanted it.

Feisty Hibaq Jama, 30, a solicitor who works full-time as a Labour councillor, was elected Bristol's first Somalian politician three years ago; a great achievement considering she is a Muslim woman as well.

She had clashed publicly with Ferguson, asking him why Black children were ending up in failed Bristol schools. Rather than answering her statistically-proven point, he issued a rebuke, claiming her intervention was “racially divisive”.

Jama won even more favour in her community and beyond for also bravely challenging police over what she alleged was their unfair racial profiling-based in stopping and searching Somalian youth, which caused deep resentment. Police chiefs listened and things improved, enabling her to notch up an important victory for community relations.

On polling day, Jama was a key organiser, getting votes out for herself, Labour Lawrence Hill ward running mate Margaret Hickman and Rees. All three won.

Jama said: “Marvin is local and a breath of fresh air for this city. He deserves a chance to make it a better place.” 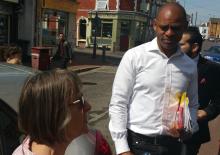 The popular politician, who is surely destined to shine on the national stage one day, mobilised many voters in the city's increasingly politically-active, 20,000-strong Somalian community.

Word back from her fellow canvassers was that Easton, one of the poorest and most ethnically diverse wards, saw a 45 per cent turnout, helped by the sunshine and the hard work of canvassers. This compared with a turnout out “in its teens” last time round, she said.

I was hugely impressed, witnessing the comradely working together of Black African, Caribbean and Asian party activists, stewarded by four seasoned white campaigners working out of their Communication Workers Union city base. It was this rainbow coalition that deserted independent Bristol First mayor Ferguson and the previously high flying Greens to flock to Rees and Labour with double the turn out of the previous election. Rees amassed nearly 70,000 votes, beating his opponent by just under 30,000. It was a stunning victory. 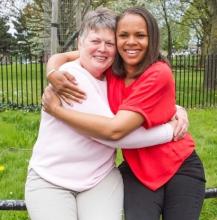 Retired lorry driver and handyman, Webster Lewis, who migrated to Britain from Jamaica 40 years ago, said: “My name starts with a 'w', which stands for worker and worker is Labour, so that's the party I have always voted for. I think that young man [Marvin] deserves a chance to run Bristol. It's something my generation stood no chance of doing.”

Documentary film director Loraine Blumenthal and producer Rob Mitchell have been following Rees since he started his last bid to become mayor, to make a film entitled After the dream, so called as an echo of US civil rights leader Martin Luther King's famous speech and the history-making Bristol bus boycott of 50 years ago that led to Black workers getting jobs from which they had been previously excluded.

Berlin-born Blumenthal, said: “It's a growing up story; Marvin, a man from Bristol's ghetto, developing politically. When he lost last time it was interesting to see him regain his strength and come out of a hole that was painful for him. He talked in the papers about his shame in getting beaten. Winning has been transformative for him.”

Such is the disconnect from mainstream politics in Britain, one white, working class voter said: “I'm voting UKIP first and Marvin second.”

Bristol-based film producer Mitchell said: “I've have known Marvin for over a decade, so it’s great to see him as the city's leader. His story of poor and modest beginnings has given him the hunger for wanting to tackle the harsh realities of inequality in society.”

He added: “His last four years have equipped him with a more rounded understanding of the deeper political and social relationships between equality interests that stem from ‘divide and rule’ control tactics that have blighted Bristol politics. Sadly, these have divided different communities in Bristol.”

“Marvin has garnered a great deal of support and, in the face of intense opposition, has held his political position. His days in the wilderness have made him a much more electable proposition with a strong network that makes him able to get the big jobs done in the city.”

He added, with a note of caution: “My only concern is the cynical one, that he still believes it's possible to bring some integrity to the political arena.”

Yunas Majothi, owner of the well-known Sweetmart Bristol shop, said he had postponed his family holiday to Kenya by two weeks so he could vote for Rees. This was typical of the passionate cross-community support for him evident on the campaign trail.

Rees said there had been loads of pressure on him to win, not least to help embattled Labour leader Jeremy Corbyn. On the Saturday when Rees's victory was announced Corbyn rushed to the city to personally congratulate his friend and ally. Afterwards Corbyn told me: "I'm just on my way back now from Bristol. Amazing sense of history."

Bristol's new mayor voted for softer left Andy Burnham to lead the party, but said he liked Corbyn. He commented, before the election: “I love the fact he is raising questions that need to be raised about the very nature of the way we do politics and economics. I think Jeremy's a symptom of people's search for authenticity in politics.”

He added: “I like him – and he made my mum comfortable when he met her; that means a lot to me.”