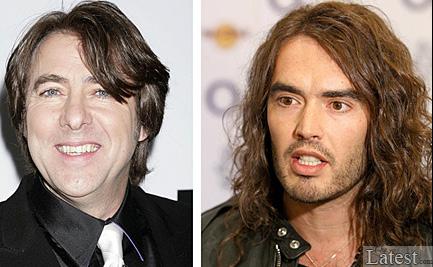 Days after the now infamous radio broadcast, complaints from the British public are still flooding in about the awful behaviour of highly-paid star presenters Jonathan Ross and Russell Brand, pictured left. The shocking pair have caused uproar as a result of their cheap sex prank.

Unfortunately the now notorious broadcast pretty much defines Brand's sense of humour which schoolboys usually grow out of quite quickly. And, as for Ross, well, his kind of solid judgement has only ever been seen in the antics of disastrous Icelandic bankers.

So, in spite of all this, you have to wonder, where Ross and Brand get their cocky confidence from? One of them resembles a thin, hairy creature with a low-cut neckline and the other walks around with floppy hair and a shiny suit. And they both seem to think that the whole world wants to be with them and that no one should really take offence or feel debased by their lavatory humour. They seem to think that anything goes provided you can get the public to laugh.

Their warped theory was best illustrated during Russell Brand's radio show where the two personalities decided to prank call Monty Python veteran actor Andrew Sachs. Sachs was initially booked to talk on their radio show. But he wasn't available to come to the phone so Brand left an spiteful, lewd message on his answering machine, revealing that he had slept with Sachs' grand daughter, Georgina Baillie, a wannabe model.

Granted, it's incredibly unedifying watching Baillie now taking advantage of her new found publicity, gleefully joining the chorus of calls for Ross and Brand to be fired. (They have both been suspended by the BBC while an investigation takes place). But that doesn't justify the way the BBC acted.

The publicly-funded broadcaster could have prevented this all from happening and issued a prompt apology to Andrew Sachs. Instead the BBC chose to allow the issue to spiral out of control to a point where they may now have to fire two of its biggest stars in order to appease the public and the press over the silly season story now making headlines.

What is amazing is that:

The news media frenzy has now reached such heights that even prime minister Gordon Brown, with his eye on wooing public opinion, has had his say on the matter, along with Conservative party leader David Cameron. They have both said the Ross-Brand phone call to Sachs was  "inappropriate and unacceptable behaviour".

But regardless of this, I don't think that the future for these two tacky presenters is as bleak as many people are predicting. Sure, they'll get a little slap on the wrist after the BBC probe. But you have to remember, it's not as if Ross and Brand were renowned as polite personalities to begin with. Regardless of this, the publicity that they have gained is really invaluable for them and I'm sure it will all come in to good use when Ross' inevitable book hits the shelves. In the world of the attention-seeking Ross and Brand, all publicity is good publicity.