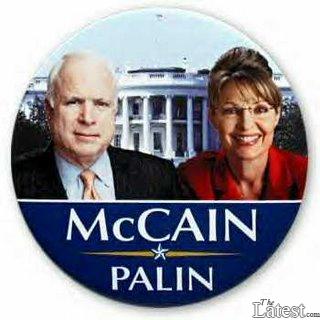 The Republican Party candidate for the vice presidency of the United States of America,whose experience in small town politics, mothers ´day dos and the local hockey club is her claim to fame, threatened to open the gates of Hell by attacking Russia in the event of another invasion of Georgia in a televised interview on ABC. One question for this self-opinionated upstart, Sarah Palin: Do you know what a nuclear holocaust is?

Mrs. Nobody know-it-all shreiking cow from Alaska, the joke of American politics, plied with a couple of vodkas before letting rip in front of incredulous audiences while McCain coos in the background, cuts a ridiculous figure as she strives to be taken seriously.

How can anyone whose husband is a member of the Alaska Independence Party and who is running for the vice presidency of the Union be taken seriously? How indeed can the Republican Party be taken seriously for not properly vetting this woman, or have they not yet discovered the skeletons in her closet? We have.

So Sarah Palin, Mrs. Hockey Mom housewife-cum-small-town gossip merchant and cheap little guttersnipe, suppose you shut up and allowed real politicians and diplomats to do their work? Threatening Russia with a war is perhaps the most irresponsible thing anyone could do at this moment in time. Have you any idea what a nuclear holocaust is? Have you any notion of the power of Russia's armed forces? Did you know that Russia has enough missiles to destroy any target anywhere on Earth in seconds?

And have you not forgotten, you pith-headed little bimbo from the back of beyond, that small detail about the slaughter of Russian citizens by Georgians, which started the whole debacle? So next time suppose you keep your mouth shut and while you're at it, make sure the members of your family keep their legs shut too. Your country has enough failed mothers as it is.

Palestinian tells of her troubled trip to Jordan