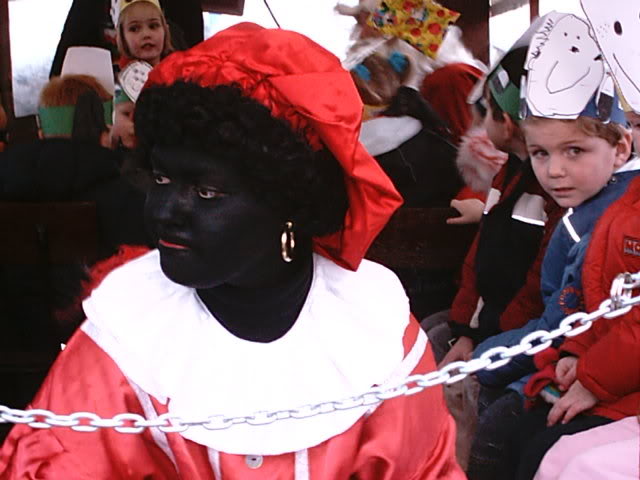 To a visitor from the UK or America the scene would be disconcerting to say the least.

Dozens of young Europeans in satin britches and curly afro wigs, in blackface, cavort through a gleeful crowd.

Their rouged lips and darkened faces recall the notorious minstrel shows of 19th-century Britain and the US.

Dressed in scarlet and blue, with lace collars and feathered caps, the performers descend on ropes from the neo-gothic Town Hall tower. One walks a tightrope high above the market square. Flashing white grins, groups scamper around the packed plaza scattering fistfuls of candy to delighted kids.

Welcome to the world of Zwarte Piet, or Black Peter, the controversial character who replaces the elves as Santa’s little helper in Belgium and the Netherlands.

To some, St. Nick's black-painted assistant represents a harmless and cherished tradition. To others it's outdated, offensive and inappropriate in an increasingly multi-ethnic European society.

"It has to be the most racist celebration in contemporary Western civilization,” writes Anthony Murrell, a black American resident of Amsterdam. “It serves as a virtual assault on all black and brown people living in Holland.”

In a Facebook post to Black American civil rights campaigner Rev. Al Sharpton, Murrell argues for cultural sanctions against the Netherlands in response to Black Pete. 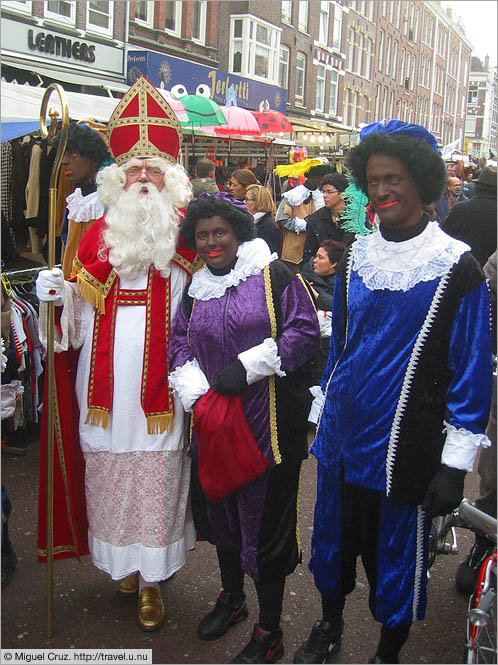 Although many Dutch and Belgian families now also give gifts at Christmas, traditionally the big day for children in the Low Countries has been St. Nicholas day on December 6. The celebration recognises a fourth-century bishop from what is now Turkey who became renowned among medieval Christians for his generosity and help for children.

Around the same time, back in the Netherlands, St. Nick gained a black assistant. His origins are obscure. Some say he evolved from a devil tamed by the saint, others that Pete is an Ethiopian slave freed by St. Nick, or a Moor with origins in Spain. Attempts to make him more politically correct suggest that Black Pete’s black face is actually the result of climbing down chimneys to deliver presents.

Initially Black Pete was a frightening figure who would whip bad children or bundle them off to Spain in his sack, while Saint Nicholas rewarded the well-behaved with treats. These days, Pete has mellowed into a mischievous scamp who assists his elderly boss with the present distribution business.

In this town named for the saint, there's no doubt who the kids are most excited to see. "Zwarte Piet, Zwarte Piet," they shout as the youths in blackface toss candy into the air while inhabitants of Sint-Niklaas — including several members of its sizable black community — celebrate the annual arrival of their patron saint on November  15.

“In the past, December was not a happy time for me,” said Wouter Van Bellingen, the first black alderman elected to the Sint-Niklaas city council. “As a child I’d go out to the market and kids would shout ‘oh look there goes Zwarte Piet.’”

“It’s not like that anymore. Fifteen years ago they hardly saw a black person. There’s been an evolution, the culture has changed,” Van Bellingen said in a telephone interview. “People see Black Peter as a tradition, but kids don’t make a link with the black people they see in class or in the street every day.”

Van Bellingen hit international headlines in 2007 when three local couples refused to allow the newly elected black councillor to officiate at their weddings. In a gesture of support for the centre-left politician, 626 local couples gathered at the city hall weeks later to have Van Bellingen renew their marriage vows.

After complaints from immigrant groups, efforts have been made in The Netherlands to replace Black Pete’s blackface with rainbow-coloured makeup, but such initiatives have had little success.

Van Bellingen thinks banning the blackface would be counterproductive — he thinks it will simply fade away.

“I'm convinced that Zwarte Piet will disappear. People say it’s part of Europe’s heritage, but Europe is changing, becoming more [diverse] …. In 20 years, Zwarte Piet will no longer be an image we see in Europe."

Be our eyes and ears and join The-Latest

What do you think of the UK government's handling of the Covid-19 pandemic?
The government is doing a good job
57%
The government has made too many mistakes
29%
I don't know. I feel overwhelmed by the crisis
14%
Total votes: 14