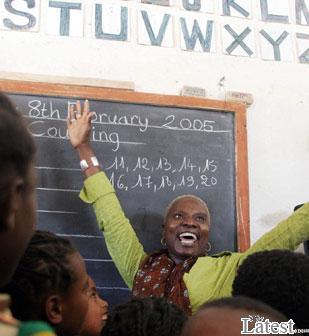 Angelique Kidjo, the internationally-acclaimed Afro-pop singer and UN goodwill ambassador, has launched a foundation to pay for girls' education to give them a chance to escape poverty.

Kidjo, who is from the impoverished nation of Benin, said the Batonga Foundation would grant scholarships to nearly 400 girls completing primary school in five countries. It will enable them to attend high school and go to college if they wish. Launching the fund in New York, she said she hoped the fund would eventually cover all of Africa, although to begin with she is starting in just five countries - Benin, Cameroon, Ethiopia, Mali and Sierra Leone.

"It's better to start little than to start big and fail," she said. "We are talking about kids that rely completely on a scholarship that you're going to give them to have a future. You can't drop the ball in the middle." Batonga is being launched with a trust fund donation of $300,000 and will focus its efforts on helping children from the poorest families, especially those affected by HIV/Aids and many of whom are orphans. Kidjo said research has shown that educating women reduces child mortality, improves family nutrition and decreases the incidence of HIV.

As well as scholarships, Batonga will also build new schools, provide girls with mentors, and work with communities and schools to improve teaching methods and girls' education. Kidjo is a goodwill ambassador for the UN children's fund The initial fund will cover sponsorship for the first group of girls and build one school in Sierra Leone. Hugh Locke, founder of Vox consulting, which is advising Batonga, said: "Educating girls is the single most cost effective way to address poverty in Africa right now."

Next year the foundation is looking to raise $3m to expand the scholarship fund to 3,000 students, to build 10 more schools, and to support existing schools by building dormitories, providing school supplies and training teachers. Locke said that in considering the Batonga project, he found that the importance of educating girls is reflecting something of a growing international consensus.

In January, Oprah Winfrey, the US talk show host, opened a $40m secondary school for girls in South Africa, saying she wanted to groom talented girls from poor families to become leaders. Launching the fund, Kidjo said her parents had instilled the value of education from an early age. She said she had been moved by girls she met while travelling as a goodwill ambassador for Unicef, the United Nations' children's agency, who told her they wanted to do something with their lives. "I don't believe my continent can move forward without education," she said.