Snowfall in Britain - why the panic? 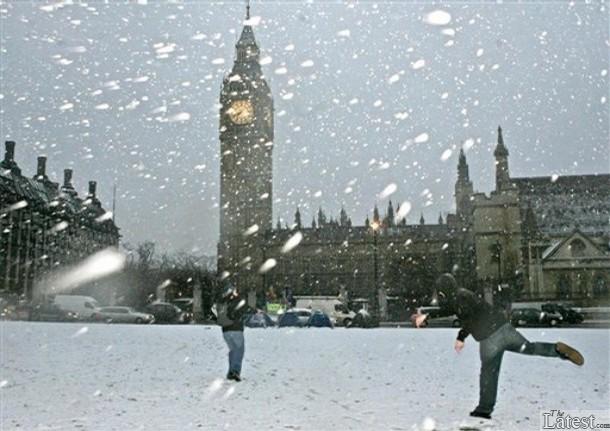 What is all the fuss about? A few flakes of snow and the country has shut down.   For a Canadian this is just delightfully amusing.

There are hardly any people on the streets, and the ones who have braved the snow are out making snowmen or laying on the ground making snow angles. Everyone is taking pictures. There are no buses, the rail system is on standby and flights have been cancelled.

I just went out like it was a normal day, and everyone said, "go home!" I knew I was in for a good time last week when there was a little frost, hardly anything at all, and already Westminster had started to salt the pavements. My delight has only increased. It's also amusing to watch people walking around shielding themselves from the snow with umbrellas. People, umbrellas are for the rain. Not for the snow.

On BBC Radio 2 earlier, our mayor was heard to say that London transport was coping well. "The snow," continued Boris Johnson, " was the right type but the wrong quantity."   It's almost as good as my favourite British Rail excuse: there are swans on the track. That will be the title of my autobiography.

I think it's out of sheer envy that I find the fact that schools have closed equally hard to accept. Despite growing up in Montreal, where they get huge quantities of several types of snow, and Toronto, which gets less, I never ever got a day off school. Clearly, I am still bitter. As opposed to bitter cold. When it's -25C, which is what it dipped to last week in Toronto, things get messy. Everything freezes, the driving is dangerous, people stay in. I once tried to get my ex-husband to freeze to death when it was -40C by accidentally locking him outside. Still the city carried on.

Of course, I am prepared. I feel exceptionally snug that I caved   into a fashion trend a couple of years ago and bought genuine Canadian mukluks, white furry boots that my friends in London scoffed at, saying I had followed in the ghastly chav footsteps of Colleen Rooney, whereas my Canadian friends just rolled their eyes. Trend or no trend, none of them would be caught dead in mukluks. Their loss.

The First Nation people knew a thing or two about snow survival. These babies   grip the   pavement so you can float over ice, snow, sleet, slush without a single worry that you are going to slip and kill yourself. This is where it starts. Canadian world domination is next. By that time Britain should have recovered from the worst snowfall in 18 years. Meanwhile, let it snow.

US without 'moral authority' to take Gaddafi to Criminal Court

3 Responses to "Snowfall in Britain - why the panic?"

Well done, Heidi. You&#39;ve hit the nail on the head with your well-observed, timely piece. A little bit of snow and my gym was closed. When I phoned to pay a traffic fine I was greeted with the recorded message: &quot;No advisers are available because of the adverse weather.&quot; Guess I have an axe to grind. My mother is from Arctic Finland where they take snowfall at this time of year in their stride - the same as Canada. Finnish relatives marvel at the paralysis which occurs in England when the white stuff falls. And what of the highly-paid weather forecasters who are about as useful as people who write horoscopes. Am I right to suspect that a majority of English people are all too happy to use wintry conditions as an excuse to skive off work and school?

<p><strong><u>Chris Gaynor</u></strong></p> I agree with most of that and add that the government are too slow to catch a cold with dealing with what was clearly predicted by all the weather forecasters. This government couldn't run a ski slope centre....

This is ridiculous.<br />Yes, business as usual carries on in countries where heavy snowfall is nothing unusual, because it&#39;s the norm.<br />Britain isn&#39;t prepared for snow of this level because it&#39;s not normal, having plans and always being prepared to utilise them on short notice would be a huge loss of money, especially because it hardly ever happens.