Soldier refusing to fight in Afghanistan 'tormented' in prison 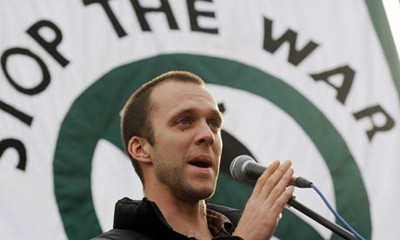 Joe Glenton, the British soldier (left), who refused to return to fight in Afghanistan in a war he believed to be unjustified and unwinnable, is receiving cruel treatment at the hands of military prison staff.

This follows his court martial and sentence to nine months imprisonment in March.

The prison authorities are trying to force him to sleep under an unwashed or dirty blanket - a punishment that often leads prisoners to get body lice - and to wear boots despite the fact he has broken his toe.

He has also received no treatment for his Post Traumatic Stress disorder despite the fact that the judge who sentenced him 36 days ago assured the court he would receive treatment in prison.

Problems started after complaints that he was not receiving books sent by supporters. On Thursday April 8 he was told he was to be disciplined after claims he insulted an officer.

Joe denies the claims. The authorities refused his lawyers' application that he be represented at the disciplinary hearing.

Joe has refused to accept the 'blanket treatment', part of a punishment called One Bravo, despite threats of solitary confinement.

Joe's mother Sue Glenton said: "We are seriously concerned for his welfare. This kind of bullying and victimisation is simply unacceptable. It is hardly going to help his mental state."

John Tipple, Joe's legal caseworker, said: "This kind of treatment is from the 19th century not the 21st. We are determined to test its legality in court at the first opportunity. The military should not be allowed to get away with this cruel and degrading treatment."

Most people in Britain oppose the war in Afghanistan. It is extraordinary that Joe Glenton, already being punished for his anti war views by a nine month prison sentence, is now being picked on by the military in prison.

Stop the War Coalition will be organising protests outside the military prison where Joe is being held and at his appeal hearing against his prison sentence on Wednesday April 21.

You can email your protest about the prison's treatment of Joe to: mctcwelfare@hotmail.com.

How offensive is the word 'pikey'?