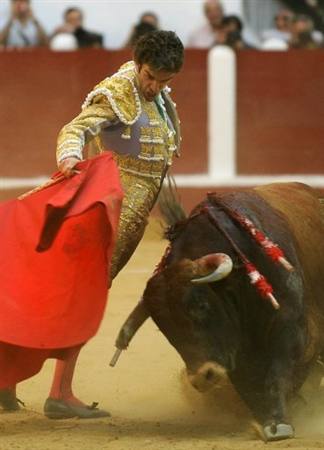 Spectators are cheering. The bull is in agony having had lances driven into its back and neck by men on blindfolded horses. When the bull can no longer lift its head drenched in blood, men twist and gouge the lances.

Then, banderilleros enter the ring and plunge harpoon-pointed sticks into its back by distracting it, before the matador attempts to kill it with a sword. The bull lies flat on its back drenched in blood, physically tormented, before it´s ears are cut off and it is dragged out of the arena by its horns.

This is a typical bullfighting scene which occurs regularly in Spain. According to the country’s Ministro Interior, Barcelona held 18 bullfighting spectacles in 2008 and Madrid held 368.

Bullfighting is regarded by some as an integral part of Spanish culture and an art which should be preserved, yet it was condemned by 67 per cent of Catalonians last December, when the bullfighting organisation Prou! (meaning Enough!) collected over 180,000 signatures in favour of a ban.

The popular legislative initiative was then taken to the Catalan parliament who voted this week to prohibit bullfighting from January 2012. Deputies in parliament voted by 68 to 55 and nine abstained. Catalonia is the first region in Spain to ban bullfighting.

Jenny Berengueras, a spokesperson for Prou! said that they have been raising awareness of the issue for a long time, and that Spaniards are “immune” to the issue because they always see it on Tv.

Berengueras said: “A lot of tourists go because it’s included in their holiday pack and they don’t realise what they are about to see. When they come out of the show they are horrified. It doesn’t seem so brutal and bloody in the media.”

She added: “We believe this tradition will end. There are other forms of entertainment that don´t involve murdering an animal in 20 minutes. It shouldn´t be a legal show.”

Spaniards have finally decided to prioritise animal cruelty over tradition, though there are claims that this was only decided to separate Catalonia from the rest of Spain. Berenguera said: “This is not about us, it is about the animals.”

And many see the ban as a threat to the economy. Antonio Lorca López, from Spanish newspaper El Pais, said: “People affected will have to be compensated, from bullfighters to taxi and bus drivers.”

He added: “Bullfighting is a wonderful spectacle and a more dignified death than that of most animals that are destined for consumption. If we start humanising animals, we would have to suspend a great deal of human activities. I think it is much worse to have chickens stored together without seeing daylight, and when I cut a flower for instance, I don’t know if the flower is suffering, or when I boil a snail alive and eat it, I don’t know if it is suffering either.”

Sam Glover from animal rights group PETA said: “Bullfighting belongs to history books. A 2006 Gallup poll found that 72 per cent of Spaniards have no interest at all in watching bullfights.”

He added:  “Most people who have witnessed a bullfight after visiting a country where the “sport” is permitted, report that they never want to see one again. They are repulsed, disgusted and saddened by the cruelty of bullfighting.”

Catalonia has taken a decisive step but bullfighting is still widespread in the rest of Spain and Latin America.

Saskia Oskam from Cas International, the biggest anti-bullfighting organisation based in the Netherlands, said: “The PP (People´s Party) says that Catalonia has always been differentiated and that banning bull-fighting will differentiate them from the rest of Spain. But that is not the issue. This initiative was done for the animals.” She backs this up by explaining that 87 countries have declared themselves against bullfighting.

Oskam also said that society is more aware of this cruelty than ever before. “A few years ago politicians and the media were scared to go against bull fighting, but now they also write about demonstrations”, she said. “They are now aware that bull-fighting and fiestas with bulls are cruel.”

US blockade against Cuba is 'international bullying'