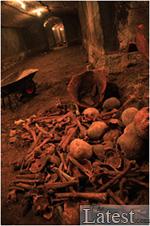 Builders at the site of a new tourist attraction in Britain's capital city are refusing to work alone after skeletons were found in a sealed vault in the basement.

The site is being developed by two brothers from Kent who said some of the builders were too scared to work. According to Lee Scriven, of West Malling, tools had mysteriously disappeared and light bulbs had blown for no reason. He said: "Lads have put down their tools to go for a cup of tea or a fag outside, and when they get back they're nowhere to be found. At first we thought they were just mucking about, but it's happened a few times now with hammers, screwdrivers, and even a power drill."

Mr Scriven added that in the last week at least a dozen light bulbs had blown despite the electrics being in "perfect working order". "Worse still, the contractors are getting the creeps and have said if it gets any worse they're off. "Even the toughest lads aren't keen to be down in the tombs on their own now and I've noticed that they're tending to be moving around the site in pairs. "I can't blame them really, there is a strange feel about the place".

He and his brother Danny Scriven, of West Kingsdown, are considering using the services of a medium to find out exactly what lies beneath the bridge. The brothers said a second haul of bones found under concrete flooring two weeks ago seemed to have intensified the spooky activities on the site.

Michael Buxton, one of the contractors, said the discovery of the bones had made him feel very uncomfortable.
"It's as if someone's watching you," he said.

The area was originally used as a plague pit and may have been the site of an old cemetery for Southwark Cathedral. Hundreds of people, including Braveheart William Wallace, Guy Fawkes and Wat Tyler, were also executed on London Bridge, with their heads impaled at the Traitor's Gate. A few of the remains have been found with holes in their skulls.

The  £2m attraction charting the bridge's 2,000 year history and offering a spooky tour of the London Tombs is due to open next February.

We're backing Annaliese to be a Kiss radio presenter