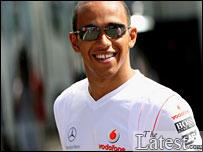 British sports sensation Louis Hamilton says he may leave the country to live abroad to get away from the hounding he has been experiencing at the hands of the paparazzi.

The 22-year-old newcomer who is at the top of the Formula One championship table said: "Every time I go to London, cameras appear from God knows where," he said ahead of Sunday's Turkish Grand Prix.

"I'm definitely contemplating living outside the UK. I've always dreamt of living in London but it's becoming more and more difficult. Pressure on the track doesn't get to me, I'm able to manage it, but in your personal life it affects you," added the current highest earner in British sport.

If I can't live a normal life and enjoy my life without being spread across the tabloids... we'll just have to wait and see

"I can see from the experience of Fernando what can happen," Hamilton continued.

"He's so big in Spain, he can't stay there because he can't go anywhere and live a normal life. I thought that wouldn't be the case in the UK."

Louis would not be the first driver to leave Britain, with high taxes another consideration. Nigel Mansell lived in the Isle of Man during his time in Formula One, while David Coulthard currently calls Monaco home. Hamilton complained that he was besieged by photographers during his recent holiday in the south of France.

"My whole holiday was in the papers. I was trying to relax, but I couldn't swim, because the cameras were waiting to get 10,000 euros for the pictures," he said.

"If I can't live a normal life and enjoy my life without being spread across the tabloids... we'll just have to wait and see. It's down to the media, really."