In the last 50 years, we have observed a number of subtle, yet substantial revolutions in the way we approach our choices over food. One of the earliest revolutions saw us shift from shopping little and often with local producers – and investing in the local economy – to being swayed by the “stack ‘em high, sell 'em cheap” rhetoric, sold by supermarkets and the international economy.

Most of us develop a strong sense of solidarity with our favourite supermarket, and can choose where we spend our money each week. However, there is a gap in understanding at the political level when it comes to those who do not have such a choice.

Food banks do not just feed the most vulnerable in our society, they feed anyone and everyone who finds that for some reason or other they just haven’t been able to make ends meet on any given week. It could be the teaching assistant left short at the end of term, the student who is struggling to finish a degree while raising a family, or the couple who both have zero hour contract jobs and are forced to skip meals to ensure their children have eaten every night.

A food bank is a place where people experiencing poverty, hardship and hunger can collect free food. And poverty and hunger has come to scar ordinary people within our society, right here in the UK. Hunger is a very real crisis.

Food bank use is currently at a record high in Britain, and has been shown to be associated with deprived areas of the country or areas with higher levels of people in skilled manual work. 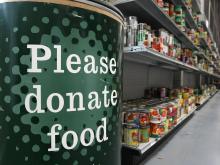 The introduction of austerity measures by the coalition government, and continued at a pace by the current Conservative government, has brought about a rise in poverty. Under the previous Labour government, Wales had just 16 food banks in total – ten operated by the Trussell Trust, the UK’s largest network of food banks, and six independent – the first of which opened in 1998. Austerity, coupled with a system of punitive benefit sanctions following the 2010 election, has seen food bank openings soar during the last five years to 157 in Wales – 114 now run by the Trussell Trust and 43 independent.

In the 2015-16 financial year, the Trussell Trust handed out 85,656 three-day food packages in Wales alone – a country of just over 3m people.

The introduction of food banks in the UK is similar to what is happening in the US and Canada, and their approach to answering the question of “what to do with poverty in plenty?”. There, food banks play a more substantial role in food welfare assistance programmes and typically follow a warehouse model, where food is stored in a central depot and then distributed through to the associated food pantries on a local scale.

But in North America and Canada, where food banks are established and endemic, their visibility reinforces divisions between “those who have, and those who have not”.

The recent rise in diseases once consigned to the history books, such as rickets, shows the impact of food poverty on life chances. Food banks do try to provide a balanced diet which is as healthy as possible. However, this is usually limited to non-perishable tinned produce.

Away from health concerns, the most worrying issue is that food banks may eventually become an institutionalised part of the welfare state; 42 percent of referrals to the Trussell Trust alone last year were said to be due to problems with the welfare system – for example, slow payment and processing of benefits, along with sanctions.

This growth in food poverty shows that there is a flaw in our political system and the reduction of benefits is causing food poverty, a fact confirmed by the all-party parliamentary inquiry into hunger and food poverty.

The growth of food banks – either through the work of the independent sector or through the Trussell Trust – should be a cause of concern for us all. Growth is indicative of use and food banks should be a last resort not an established part of the system.

* Dave Beck is a PhD Researcher at Bangor University.