Swine flu epidemic - that sneeze may be your last 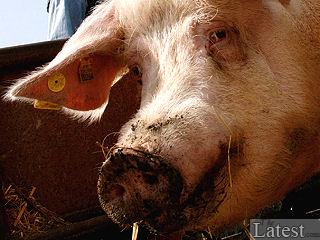 You might as well get everything in life that you've wanted to do for a long time out of the way right now. Swine flu is coming. We're all going to die.

People are dropping like flies and the pandemic is seemingly going global. By the end of May, to celebrate my birthday, I may be one of the lucky ones alive and well enough to spoon the carcasses of once-prosperous and healthy human beings into mass graves around the world with my disease-ridden hands.

She added that "seven other people who had been in contact with them were now displaying mild symptoms."

Oh … hang on. We're going to be fine. A bad cough here, a sneeze there. Gone are the days of exploding eyes and vomiting up your own intestines. At least, that's the gravity that seems to be conveyed by the media regarding swine flu. I was at least hoping for some severe necrosis akin to the effects of the T-Virus from Resident Evil.

As per usual, mainstream media is happily displacing real tragedy and issues across the world with an innocuous run of sad yet generally unimportant pseudo-news. Mortgage lending has dropped again, probably setting the housing market back another month or two. The police are now asking all communications firms to monitor every internet user and their contacts as an "upgrade" to surveillance. Tv personality Graham Norton broke two ribs (shortly after he finished hosting Sunday's Bafta TV Awards ceremony) which is the funniest thing he's done since his acting role in the Channel 4 sitcom Father Ted.

I mean, hasn't influenza always been deadly in one form or another? According to several news reports floating around for the last few days, it's as if this form of one of the world's most common killers could suddenly wipe out the human race, including your mum, dad, kids, siblings, friends and anyone else who had the nerve to be in good health.

One hundred people have succumbed to it in Mexico: a country that, to be fair, is not on the list of the world's best health services, with the AIDS epidemic becoming the third-biggest killer across the nation. Our own NHS is hardly top of the table but, well, we've been geared up for this kind of thing for a long time now.

Despite having excellent healthcare in many cities, Mexico suffers from the Russian effect: too much land, too many villages and not enough communication. This, in any situation, is a recipe for trouble.

It all stems down to our seemingly unnatural fear of conditions which have creatures tacked onto the front. Before swine flu, we had bird flu. Chicken pox has always been a big threat to adults too.

Should that fail, an acronym or random grouping of letters and numbers can always strike fear into the most hardy of individuals, usually because they can't be arsed to figure out what it stands for. Fear of the unknown has been one of humanity's greatest flaws for aeons. Oh no, SARS! Uh-oh, MRSA! Watch out, here comes H5N1!

The fact remains: the flu jab is encouraged in older folk while general healthy eating, a solid daily dose of vitamin C and plenty of vegetables have all been linked to avoiding the worst parts, or the prolonged pain, of the virus.

I know this news detracts from the altogether very real problem of the recession - something else entirely exacerbated by the media - yet I think we're now all used to bad news being the only trump card against more bad news.

Heartfelt plea to the youth: 'Give up your knife'

Where is our President - alive or dead?

It&#39;s evidently all the fault of Mexico...first the Earthquake, then the drug problem thing...and now the rage virus...poor mexicans...so far from god, so close to G. W. Bush...seems like apocalypse...&quot;28 months later&quot;, anyone?And lastly, who&#39;s to be the good cowboy and blow off the bridge now? All Chechen Itza plans postponed...<br />