Canadian writer T (Trevor White) is morbidly fascinated by a notorious UK patricide case in which young Martin Santos (Alex Austin) stabbed his father multiple times and waited hours to notify the police. T is so intrigued by Santos’ story, he decides to adapt it for the stage.

He schedules a series of prison visits; part fact-finding mission, part therapy for both. T shares his research with novice actor Freddie (Austin again), whom he has cast to play the on-stage Martin. Despite a clinical creative ambition on the writer’s part, he forges a quasi-familial, sometimes not-so healthy bond with his troubled subject. 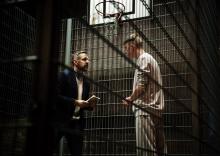 Director Daniel Goldman’s translation of Uruguayan playwright Sergio Blanco’s Thebes Land, heartily manipulates the faith of its audience. Even seasoned theatregoers, accustomed to auteurs toying with the concept of suspended disbelief, would nonetheless struggle to get a grip on the several layers of reality. The effect is as disconcerting as it is hypnotic, even allowing for the odd legal inaccuracy to pass by unnoticed.

White’s ‘T’ parades the parameters of what Goldman describes as the "beautifully constraining" cage (designed by Jemima Robinson) in which most of the action takes place. T alternates between frequently breaking the fourth wall to address his audience and conversing with whichever incarnation of Austin’s complex duality is on display. This is not the navel-gazing exercise it appears on paper. Thebes Land is at times a mordant self-parody whilst always remaining an incisively disturbing character study.

Blanco and Goldman artfully avoid labouring the inevitable references to the Oedipus myth. It’s all but incidental to the first act. Instead, Goldman uses it as a springboard to explore a host of themes ranging from the obvious paternal/filial conflict to class division, definitions of masculinity, mental illness, the role of religion, voyeurism, dramatic representation and more besides. Not bad for two hours. Yet there’s a paradoxical simplicity at heart. The piece is never overwhelmed by the volume of discussion points.

The two-hander is anchored by magnetic performances from White and Austin. The latter is superbly versatile, metamorphosing from open and guileless Freddie to the slouching, low-octave growl and hooded-gaze of tormented Martin. He is no doubt one to watch.

Moving and unsettling, Thebes Land is an unequivocal coup-de-theatre.

Thebes Land plays at The Arcola Theatre, London until 7 October 2017.

The production is part of the 10 year anniversary celebration of the Casa Latin American Theatre Festival 3 September – 28 October 2017.

*Tola Ositelu has been a freelance writer and blogger for almost a decade. She’s interested in arts, culture and social commentary.